It's easy to criticise the curators and the ground staff, but when higher powers send clear signals that they prefer a match going the duration to a result, then why make the man on the ground the fall guy? 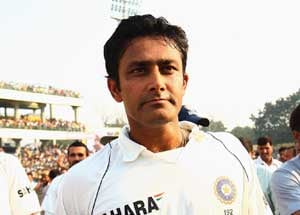 You're a cricket fan. If you're reading this, I assume that you are. And if you're one of those with the inclination and patience to watch Test cricket, which match would you rather watch? The first ended on the fifth morning, and saw 1169 runs scored for the loss of 39 wickets. The second, played four years later, went the full five days, and as many as 1598 runs were scored while the bowlers toiled for just 21 wickets. Over the final three days, when subcontinent pitches traditionally deteriorate, only eight wickets fell.

The ICC match referee reported the first pitch as substandard, though it produced an engrossing contest and a result. The second, where a result might not have been possible over seven days, escaped unscathed. Apart from any fans that died of boredom, no one paid a price for a surface that made a mockery of the idea that cricket is a contest between bat and ball.

Both those matches were played at the Motera Stadium, against Sri Lanka. It's easy to criticise the curators and the ground staff, but when higher powers send clear signals that they prefer a match going the duration to a result, then why make the man on the ground the fall guy?

I thought of those Ahmedabad pitches while watching the action from the Gabba earlier this week. A day lost to rain ruined chances of a result, but it also looked nothing like the surfaces that the Gabbatoir - as it was known in the days when Australia routinely slaughtered opposition there - was once famed for.

Time was when swing would be allied to appreciable movement off the pitch, a combination that made run-scoring an arduous task. In six Tests between 1987 and 1992, only one team (Sri Lanka) went past 400 at the Gabba. And it wasn't always pace either. In 11 Tests, Shane Warne took 68 wickets at 20.30. Two of his 10-wicket hauls came there, including astonishing figures of 11 for 77 against Pakistan.

In recent times though, the Gabba too appears to have regressed. England scored 517 for 1 in the second innings of the last Ashes Test played there, while Australia batted through the fourth day of the recent game for the loss of Ed Cowan's wicket. Even Dale Steyn, a bowler so skilful that he has tormented batsmen on placid Indian pitches, was made to look largely innocuous.

The 'problem' with the Motera pitch in 2005 was that it took turn from the opening day. As if that was a bad thing. VVS Laxman made one of his most accomplished hundreds, and there were superb innings from Irfan Pathan and Yuvraj Singh in pressure situations. Compared to the monotonous run fest four years later, it was a game that saw fortunes fluctuating every session.

When India beat England at Mohali in 2006, Anil Kumble had figures of 5 for 76 and 4 for 70. But on a pitch where England's quicks took ten wickets, it was Munaf Patel - with the wickets of Kevin Pietersen and Andrew Flintoff in the first innings, and 4 for 25 in the second - that delivered the spells that broke open the game. It may have been a spin-friendly surface, but it brought most cricket skills into play.

That's not something that can be said of an especially dire pitch in Pune that saw 1443 runs scored for the loss of 13 wickets in a recent Ranji Trophy match. Afterwards, Daljit Singh, chairman of the board's Grounds and Pitches Committee, was quoted as saying: "The BCCI's directive regarding the wicket that would be prepared for the Ranji Trophy is pretty clear. It should be a sporting wicket where a standard first-innings score should be in the region of 550-plus and it shouldn't start turning square from the first day itself."

Do you hear the same alarm bells that I do? How can you possibly use 'sporting wicket' and 'score in the region of 550-plus' in the same sentence? Why shouldn't a pitch aid sharp turn from day one? The India-Pakistan series of 1986-87 was one of the worst advertisements for the game in my lifetime, a series of abysmal defensive draws redeemed only by a superb contest in Bangalore.

Maninder Singh took 7 for 27 on the opening morning, but Pakistan - who had spin weapons of their own in Iqbal Qasim and Tauseef Ahmed - prevailed by 16 runs in a thrilling match also remembered for Sunil Gavaskar's epic 96. Instead of that, you want 550-plus? Why not go a step further and give first-class cricket a lethal injection? Are those in positions of authority deluded enough to think that people in the 21st century are so bereft of options as to sit through five days of a snore draw?

Give us this day our pace and bounce, or give us sharp turn. Forgive us our craving for results, or at least the possibility of them. And deliver us from flatbeds where nothing ever happens. Amen.