England fast bowler Stuart Meaker is confident of earniing his Test cap as he feels he had a good outing with 3 wickets against Haryana on a flat wicket. 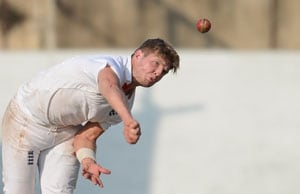 Fast bowler Stuart Meaker feels by taking three wickets against Haryana on a 'flat' batting strip, he has done a decent job which may help him get into England XI for the first Test against India.

Meaker, who plies his trade for Surrey county, was called in at the last minute as a cover for injured Steve Finn.

With Stuart Broad also nursing a heel injury, his playing chances brightened. But, it depended on his performance against Haryana, a side that had last week got a hammering at the hands of Vidarbha.

Meaker said the wicket offered no, seam, bounce or spin.

"The wicket is flat. But, I have done no harm to my chances to get into the playing eleven by picking up three wickets. India is always a tough environment to bowl in," Meaker said after day's play.

Surprised with the call as replacement for Finn, Meaker said, "This is a great chance for me. Personally, if I perform here, it bodes well for my future. Whenever I get a chance, I try to impress through my performance."

The 23-year-old said he has always looked at the long-term picture rather than focusing on short-term goals.

About Nick Compton, who is all set to make his debut against India here, he said, "It's a great chance for him to showcase his skills. He is a gifted batsman and he is reaping rich rewards of his hard work."

"He applied himself nicely and didn't give us too many chances. But, the pitch was totally flat. So, it was naturally easy for batsmen to adjust."

Dewan carried his bat through the innings with an unbeaten 143 as the host team ended their first innings at 334 in reply to England's 521.

Dewan was happy to have preformed well against a top side.

"It was good for my self-belief to perform against a Test team. The bowling was good. There were no loose balls on offer. No lapse in concentration could be afforded."

He said this match was a good practice ahead of the challenges in the Ranji Trophy.

Comments
Topics mentioned in this article
Cricket Stuart Meaker Alastair Cook India vs England 2012 England Cricket Team Ravi Bopara Nick Compton UP HAR Rahul Dewan
Get the latest Cricket news, check out the India cricket schedule, Cricket live score . Like us on Facebook or follow us on Twitter for more sports updates. You can also download the NDTV Cricket app for Android or iOS.