Steve Finn will miss the Ahmedabad Test due to his leg injury that he sustained in a tour game. Stuart Meaker has been brought in as cover. 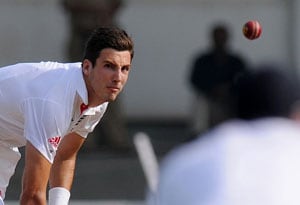 England pacer Steven Finn will not take field against India in the first Test tomorrow in Ahmedabad as he has not recovered completely from his leg injury.

Captain Alastair Cook says "it is too big a risk" after an injury. India and England play the series opener in Motera from November 15 to 19.

The 6-foot-7-inch pacer did not bowl in the practice session of the team for the second day running on Tuesday after raising hopes of recovering from his leg injury two days ago.

The Middlesex player bowled five overs at the nets on the final day of the tourists' last warm-up game on Sunday at the outer ground of the Motera Stadium against Haryana. He did not bowl at all on Monday and this morning.

The 23-yar-old bowler had limped off with a right thigh muscle strain after bowling only four overs in the tourists' opening warm-up game against India 'A' played at the Brabourne Stadium from October 30-November 1.

Stuart Meaker, another young fast bowler, has been flown in as a cover for Finn and also played in the four-day game, but he will go back home once the latter recovers from his injury.

Comments
Topics mentioned in this article
Cricket India vs England 2012 Steven Finn England Cricket Team India Cricket Team
Get the latest Cricket news, check out the India cricket schedule, Cricket live score . Like us on Facebook or follow us on Twitter for more sports updates. You can also download the NDTV Cricket app for Android or iOS.