In English conditions, the seamers might have had an upper-hand but the sub-continent pitches will definitely bring in Graeme Swann and may be Monty Panesar or Samit Patel into the reckoning. 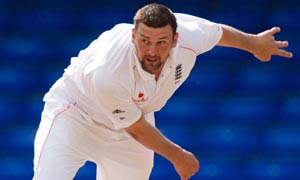 Former England paceman Stephen Harmison expects spinners Graeme Swann and Monty Panesar to take most of the tourists' wickets during their series in India but says the seamers will also have a key role to play.

Alastair Cook begins his stint as full-time Test captain on Thursday when the first of a four-match campaign gets underway in Ahmedabad with England seeking their first series win in India since 1984/85.

"It's very difficult. I'm sure England are banking on Graeme Swann and Monty Panesar doing the bulk of the wicket-taking," Harmison told Sky Sports.

"They (the England seamers) all bowl well with the reverse swinging ball and I think that's going to be the key for England whether it's (Steven) Finn, (Tim) Bresnan, (James) Anderson, (Stuart) Broad and (Graham) Onions.

"They all need to bowl well with the reverse swinging ball but I imagine the spinners are the ones that take the bulk of the wickets," the 34-year-old Harmison, who in 63 Tests took 226 wickets at 31.82.

"If you want to be the best bowler that you can possibly be you've got to go out and perform in these countries."

"I'm sure they'll have a gameplan to stop boundaries and cut off the big shots that the Indians do like to play and build pressure that way," he said.

"England's gameplan first and foremost will be to stop them from scoring.

"England won 4-0 in England when they bombarded the Indians with short balls, they probably won't be able to do that again as the ball doesn't tend to bounce above shin height.

"It will be tough but I'm sure they'll do a good job."