On whether Mahendra Singh Dhoni should be retained as Test captain, Ganguly said it was for the selectors to decide. 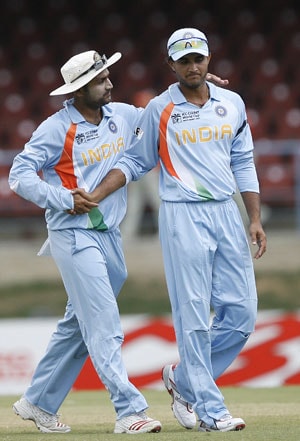 Former captain Sourav Ganguly refused to think that Virender Sehwag's ODI career was over after he was dropped from Indian squad for the first three matches of the ongoing series against England and said that the opener has still a lot of cricket left in him.

Asked if Sehwag's one-day career was over after he was dropped from the Indian squad, Ganguly said, "You can't say such things. I feel he has lot of ability. Forget about Sehwag who has done so well in ODI. You cannot say such things about anyone. We will just have to wait and see."

On whether Mahendra Singh Dhoni should be retained as Test captain, Ganguly said it was for the selectors to decide.

"Let the selectors decide that," he told a news channel.

Asked if India's current crop of young fast bowlers will become mature and competitive by 2015, he said, "It is a young team, it is very difficult to give a time frame. We will have to wait and see how long they take."

Comments
Topics mentioned in this article
Cricket India vs England 2012 Sourav Ganguly Virender Sehwag
Get the latest updates on India vs South Africa and check out  Schedule, Results and Live Score. Like us on Facebook or follow us on Twitter for more sports updates. You can also download the NDTV Cricket app for Android or iOS.