Credit should also be given to young Milind, who showed a lot of maturity and paced his innings to perfection. Whether it was playing the slash over deep third man or driving on the up, Milind had an answer to everything that was thrown at him. 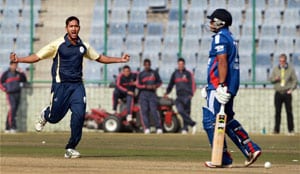 Two innings of great skill by two men at contrasting stages in their careers and a close finish with a win for the home side lit up a typically cold day in New Delhi when England took on Delhi at Feroze Shah Kotla Stadium on Tuesday (January 8). The end result was a six-wicket win for Delhi and that, combined with Ian Bell's brilliance in the first half and Shikhar Dhawan's response in the second, gave good cheer to the sparse crowd that had turned up.

For Bell, the innings confirmed his growing stature in the one-day format and ensured that, for all intents and purposes, he would open England's batting with Alastair Cook when the series against India begins, with Kevin Pietersen likely to come in at No. 3. For Dhawan, the innings was even more important, coming as it did against an international attack during a particularly successful domestic season, with the top-order of the national team looking for options.

Dhawan was particularly assured in his judgment - of the length of the delivery as well as of the choice of strokes and his footwork. Delhi's opening stand between Dhawan and Unmukt Chand served them well, with the two complementing each other in a 98-run association that took just 106 balls.

Chand was the initial aggressor, which gave time to Dhawan to assess the pitch and the bowling. Dhawan then took the lead and unleashed shots all around the wicket. The momentum shifted England's way when James Tredwell was introduced into the attack. Tredwell's first spell read 3-1-8-2 and accounted for the wickets of Chand and Jagrit Anand but, inexplicably, Tredwell was then taken off and brought on from the other end.

Tredwell didn't have as much success in his second spell and Dhawan kept the chase on track. He survived a huge appeal for caught behind off Tredwell along the way, but then swung the next delivery over the midwicket fence for his third six to bring up a hundred off just 98 balls, only to fall shortly after.

The responsibility for the chase then fell on Milind (78* in 85 balls), who wasn't even sure of being picked in the starting XI for the match, and Bhatia (45* in 33), who has served Delhi superbly over the years. They duly sealed the win when Milind hit Stuart Meaker to the cover boundary to set off the celebrations.

Earlier, England rode on Bell's century to pile up an imposing total. Unlike in England's first warm-up match against India A where Bell played a lone hand, he found good support this time and that allowed England's innings to prosper. Bell did have his share of luck with Anand failing to reach a top-edged sweep on time and Puneet Bisht, the wicketkeeper, missing a stumping off Anand. Bell was on 28 and 60 respectively when he offered the chances and made the most of his good fortune.

Alastair Cook (44 in 58), who returned to lead England after sitting out the first warm-up game, provided the initial thrust in a 70-run opening stand in 15.3 overs. Bell then picked up the pace and had a 113-run stand with Eoin Morgan (52 in 55) that began sedately and later exploded. The first 50 runs took 56 balls, and the final 63 took just 35 balls. Craig Kieswetter then rounded things off, hitting 41 not out in 27 deliveries including a last-ball six.

Delhi's bowlers weren't quite as incisive as India A's had been, which allowed England to capitalise after winning the toss - only Varun Sood, the left-arm spinner, kept things in check. Sood, just 22, returned figures of 3 for 45 in ten overs including Bell's wicket, which made a significant difference to the final result.

England's wait for one-day success in India thus stretched longer, and though they'll take on India as the world's No. 1-ranked team when the sides clash in Rajkot on Friday, they'll know that they are far from being top dogs after two defeats that saw their batting misfire in the first game and their bowling in the second.

Comments
Topics mentioned in this article
Cricket India vs England 2012 England Cricket Team Ian Bell Shikhar Dhawan James Tredwell Rajat Bhatia Jade Dernbach DEL Varun Sood Milind Kumar
Get the latest updates on ICC T20 Worldcup 2022 and CWG 2022 check out the Schedule, Live Score and Medals Tally. Like us on Facebook or follow us on Twitter for more sports updates. You can also download the NDTV Cricket app for Android or iOS.