Shane Warne's 5-point mantra for England to succeed against India

Shane Warne has asked England to follow a five point plan if they want to win in India. It is the same plan the Aussies used to win back in 2004. 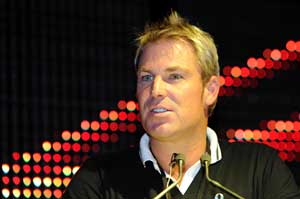 Legendary Australian spinner Shane Warne has asked England to follow a five-point game plan, including a unique bowling strategy, if they are to become first British team to win a Test series in India in 28 years.

Warne said the same plan, prepared by him, was executed successfully by the Australian side during their India tour in 2004 when they won 2-1.

"There were two important points: attacking bowling with defensive fields and defensive bowling with attacking fields. That sounds counterintuitive, so it's important to grasp the thinking behind this statement," Warne wrote in his column for 'The Telegraph'.

Warne said such tactics worked wonders for them in containing the famed Indian middle-order of 2004.

"We went with that mindset in 2004 and it worked. If, for instance, Glenn McGrath was all over VVS Laxman and Rahul Dravid then that was the time to adopt a defensive field and not be overly aggressive. So we defended with the field.

"Defending with the ball means bowling nothing but your stock delivery and being super patient, so you can attack with the field as there won't be any bad balls. If James Anderson is swinging the ball all over the place then it is not the time to attack and have four slips, leg gully and bat-pad because if he gets it slightly wrong it goes for four.

"If that happens too often, you lose momentum. This is when the defensive field-attacking bowling theory works. When he's just attempting to take the ball away from the right-hander - his stock ball, so defensive bowling - then attack with the field," he explained.

The 43-year-old veteran said the key to success against Indian batsmen would be to dry up the boundaries.

"The Indian guys thrive on boundaries. They like to have momentum all the time. If you slow that down, be patient and try to ensure that when they hit good shots they don't get boundaries, we found they became frustrated.

"They started playing attacking shots to your defensive bowling - the stock ball matched with aggressive fields. That is when you took a wicket and the theory worked," he said.

Warne, highlighting on his second point, said Cook should conduct himself as a brave leader but at the same time he needs good support from the senior players of his side.

"As for the captain, it is a huge test for Alastair Cook on his first tour in the job. At times he will have to hold his nerve. He has to be patient, communicate with his bowlers and be positive in everything he does, whether it be with body language, press conferences and interviews or batting.

"It is also important the senior players back him up with performances. If the Kevin Pietersens, Graeme Swanns and James Andersons don't deliver then India are going to win. We won in India because the senior players stood up, put big runs on the board and ensured their mates were not coming to the crease under pressure. Pretty thirties are useless. It is about seeing the job through," he said.

Warne's third advice to the English side was to embrace the Indian culture.

"In 2004, we also learnt to embrace the environment. On previous tours we struggled partly because we let external influences get us down. We blamed the external factors rather than focusing on what we were doing out in the middle. England have to be able to adapt and embrace the whole package, because the culture and the people in India are wonderful."

Warne then touched upon spin bowling and emphasised on the importance of a spinner being versatile in the Indian conditions.

"For spinners in India, my advice is to realise you will be whacked at times. It is about summing up the conditions as quickly as you can. Some of the wickets they prepare mean you have to bowl faster than normal. On other pitches you will have to bowl slower. You have to adapt, concentrate and relish the challenge rather than worry about how good they are at playing spin."

Warne, in his final point, recommended the English batsmen to focus on rotating strike to build pressure on the spinners rather than playing attacking strokes.

"Getting off strike was key, otherwise panic could set in. This is where England have to prove they have learnt from their mistakes. It is about finding momentum by rotating the strike and gauging the conditions."

Comments
Topics mentioned in this article
Cricket India vs England 2012 Alastair Cook England Cricket Team Ravi Bopara Shane Warne
Get the latest Cricket news, check out the India cricket schedule, Cricket live score . Like us on Facebook or follow us on Twitter for more sports updates. You can also download the NDTV Cricket app for Android or iOS.