With the new Ranji season getting underway, Sachin Tendulkar and Zaheer Khan are eager to get back into form and gain some useful match practice to be prepared for the Tests against England. 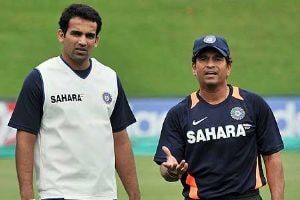 Senior players Sachin Tendulkar and Zaheer Khan will look to regain their lost form ahead of the high-profile four-Test series between India and England when they star in Mumbai's campaign against Railways in the Ranji Trophy here on Friday.

While Tendulkar will represent his home association for the first time since the final against UP at Hyderabad in 2009, Zaheer had played a few away games last season to test his match fitness ahead of getting back into the international arena after an injury lay-off.

However, both are going through a lean patch, which can make a huge impact on India's chances against the touring English team, who had beaten Mahendra Singh Dhoni's men 4-0 in August, last year.

The duo will look to boost Mumbai, who are already at full strength and starting as clear favourites against Railways, who have old war horse Sanjay Bangar, captain, and Murali Kartik, to bank upon for holding up the challenge against the might of the home side.

Mumbai coach Sulakshan Kulkarni was upbeat about the team's chances with the presence of Tendulkar and Zaheer.

"The preparation has been excellent. We have had a good three days session from Monday to Wednesday; so today we said we will have one light session.

"It is a good sign for Mumbai cricket (about them) turning out for Ranji. Sachin is probably playing after about three years. It is good sign for the team and hope that definitely the boys will learn a lot of things," he said.

The former Mumbai stumper said Tendulkar was practicing hard since Mumbai Indians had returned after the end of their campaign in CLT20 in South Africa.

"He comes around 8:00 am. He does his own fitness training and then joins the team. The way he is playing in the nets, he is very serious. He was batting everyday for 45 minutes to 1 hour non stop and he is shaping well. His feet movement was very good," said Kulkarni.

"I don't remember any other player, barring perhaps Rahul Dravid, who has been practicing for one hour. It is an achievement, to play five bowlers at a stretch for one hour and face 300 balls.

"It is very difficult to concentrate like that very hard. That shows his commitment level, his concentration his focus right focus is there," he added.

According to Kulkarni the duo's presence and their tips to the net bowlers, some of them not even among the Mumbai Ranji probables, were invaluable.

Railways skipper Bangar said playing against a strong Mumbai line-up comprising not only Tendulkar and Zaheer but also others like Ajinkya Rahane, Rohit Sharma and skipper Ajit Agarkar would be beneficial to the younger lot in his team.

"Playing against a star-studded line-up: it is good. If they perform against quality players the weight [of the performance] increases so our boys are keen to impress the big gun. We are looking forward to it," he said.

"It is an excellent thing that Sachin and Zaheer have made themselves available to play this game. Not only will they try to get back into their rhythm for the sterner Tests (against England) ahead but it also gives them insight into what is happening at the ground level.

"And they can also probably evaluate whether the standard of Ranji Trophy has gone up or down. This is also an opportunity for them to look at the talent available," the former India batsman said.

On Railways preparation for the season opener, he said it was adequate.

"We have been here for the last ten days and we have practiced at our Western Railway ground. The boys are batting well and we should be able to put up a good contest," Bangar said.

He said the team lacked experienced players except himself and Kartik.

"We have gone through a rebuilding phase and we are nearing the completion of it. Except for me and [Murali] Kartik there are hardly any experienced players in the team. We have got a good young team. All are eager to do well," Bangar said.

"We have got a couple of good quality fast bowlers so I am pretty sure that over the next two or three days you might be impressed with a few of them. If they play a couple of more games they will get a wider audience but even we can't really complain because they are playing against us and all our boys are wanting to do well against the genius (Tendulkar).

"Anureet Singh, KK and Hardik Rathod, and Ranjitkumar Mali are our four fast bowlers and out of them we will prefer to play three. We have two left-arm spinners, Kartik and Avinash Yadav," he added.

Comments
Topics mentioned in this article
Cricket India vs England 2012 Vikram Solanki Virat Kohli Wasim Jaffer Irfan Pathan Paul Valthaty India Cricket Team Sachin Ramesh Tendulkar
Get the latest updates on IPL 2020, check out the IPL Schedule for 2020 and Indian Premier League (IPL) Cricket live score . Like us on Facebook or follow us on Twitter for more sports updates. You can also download the NDTV Cricket app for Android or iOS.