Promising Joe firm in his 'Root's

The England middle-order batsman has been consistent in his outings in the ongoing ODI series against India with 132 runs in 4 games at an average of 66. 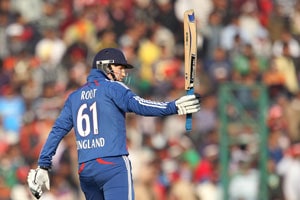 Young England batsman Joe Root, who has made an impressive start to his career by scoring runs consistently against India, said on Saturday the key to his success lies in the ability to adapt to different situations quickly.

After playing a brilliant knock of 73 on debut at Nagpur Test, Root has been among runs in the ongoing One-day series with scores of 36, 39 and 57 in three matches, where he got chances to bat.

"It's nice to be scoring some runs. It's happened very quickly for me as I am trying to gradually find my feet. I am trying to take day by day. My job will be to keep trying and contributing to the team's cause," Root, who has been one of the most consistent England batsman in the ODI series, said on the eve of the fifth and final ODI.

The 22-year-old has been the real find for England team during the Indian tour.

He comes across as a school boy lost among adults and is hardly audible even while using a microphone but one gets a fair idea of him being firmly 'rooted'.

"You need to be able to adapt to different situations. It means rebuilding in the middle-order. It was a different challenge (from Test debut) and I was trying to rise to the occasions. As a kid, you would always dream of doing well on big occasions," Root said.

Did he get nervous at any point of time, quickly came an honest answer, "Everyone gets nervous."

The youngster attributed his success to the relaxed environment of the England dressing room.

"Environment in the England dressing room is fantastic. It's settled and relaxed."

Root did admit that it was 'disappointing' to lose the series and the focus will be to re-assess the situation.

Root knows that retaining the Ashes will be high on England's agenda and that the next couple of months will be important for the team.

Asked about the Dharamshala stadium, he replied in one word "breathtaking."