Not just bowlers, all players responsible for win or defeat, says Gautam Gambhir

Gambhir said there was no need to be harsh on gangly paceman Ishant Sharma and argued that the England bowlers too struggled in the first game. 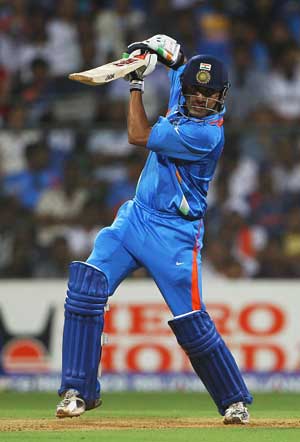 Opener Gautam Gambhir on Monday backed the under-fire Indian bowlers, saying they alone cannot be blamed for defeats and the responsibility of a result lies with all the 11 players of the side.

India had very expensive last two overs in the Rajkot ODI, where England scored a huge 325 runs and won the match by nine runs.

However, Gambhir said it would be wrong to paint the bowlers as villain as the side prepares for the second ODI, here on Tuesday.

"Only bowlers don't win the match for you. All the 11 players that get on to the field have to do it for you. Whenever the batsmen don't do well, bowlers cover up for them and vice versa. I don't believe in blaming one area of the game. I think the bowlers are putting in all the hard work, and the way they won the match for us against Pakistan (in Delhi) was commendable," Gambhir said.

"There has been just one match in this series, and unfortunately the problem here is after every defeat we start talking about form. That's not the way to look at it, we have to look at a broader picture," the left-handed batsmen said.

Gambhir said there was no need to be harsh on gangly paceman Ishant Sharma and argued that the England bowlers too struggled in the first game.

"I think he has done well in the three matches against Pakistan coming back after such a long time. It's just the last game that things didn't go his way. But he is working hard and he has been bowling really well and the results are there for you to see.

"If England scored 325, we managed to score 316. So there wasn't much difference between their bowlers and our bowlers."

Gambhir, who scored 52 in Rajkot, said good starts have to be converted into big ones but said they were chasing such a huge total in the fist match that they could not avoid playing good shots even in the middle-overs.

"You can't say as an opener you have to do this and that, we contribute as a team, we play as a team. I think I started off well and one thing is once you get a start you need to continue and get a big one. If one of us had got a big one, results would have been different.

"When you are chasing 325, you have to score at a decent run rate. It's not like you have plenty of time and keep playing. So ultimately you have to take your chances even in the middle overs. We got four half-centuries in the last match and no one could carry on, if one of us had carried on till 40th over, it could have been different story," he said.

Gambhir also said that media should restrain itself from putting pressure on youngsters such as Bhuvneshwar Kumar.

"Just let him be what he is. Don't start tagging him as an all-rounder and people will start talking that he should work on his batting. He is bowling well and if he contributes with the bat as well, it's going to be a bonus for us.

"You can't expect Bhuvneshwar coming in at 8 or 9 and score runs, because it's our job to score runs. It's not his responsibility. Let's leave him free and hopefully he will shape up well," he asserted.

Gambhir said it was important for India to not go 0-2 in the series, but they would not put themselves under any pressure by thinking much about the result.

"If we go out there and play up to our potential we are a very dangerous side in our conditions."

The opener said the Kochi wicket was almost like Rajkot. but since the outfield is not that quick, it may not be a high scoring game.

Comments
Topics mentioned in this article
Cricket India vs England 2012 Gautam Gambhir Ishant Sharma
Get the latest updates on ICC T20 Worldcup 2022 and CWG 2022 check out the Schedule, Live Score and Medals Tally. Like us on Facebook or follow us on Twitter for more sports updates. You can also download the NDTV Cricket app for Android or iOS.