No point in crying over spilled milk, says Matt Prior

"We are honest enough to admit we did not get that right. We knew the wicket was going to turn a bit. I think we got a little bit ahead of ourselves and panicked a bit," said Matt Prior. 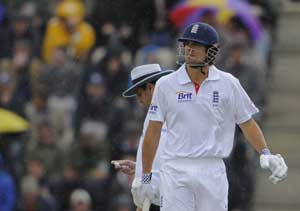 England may have their backs to the wall in the first cricket Test against India, but wicketkeeper-batsman Matt Prior insisted that they were "still in the game".

After being bowled out out for 191 to give India a huge 330-run first-innings lead, England staged a fightback through skipper Alastair Cook's unbeaten 74, which took them to 111 for no loss at close on day three.

"It was a shocker to lose wickets quickly and was disappointing. As a professional you have to look ahead and take positives. The way (Nick) Compton and Cookie (Alastair Cook) went about their task this afternoon was fantastic. We are behind but are still in the game," said Prior.

Prior top-scored with 48 in England's first innings.

India made 521 for eight declared in their first essay.

"We are honest enough to admit we did not get that right. We knew the wicket was going to turn a bit. I think we got a little bit ahead of ourselves and panicked a bit.

"(In the) second innings we were a lot more calm, led by Cookie and Compton, the way they batted. May be it's turning a bit, bouncing a bit, but you can bat with time out (there)," Prior added.

Though the team was shot out for under 200 with Pragyan Ojha taking five wickets, Prior said it was better to look ahead.

"There's no point in crying over spilled milk, you have to move on. We are still in this game though we are behind as 111 for no loss sums up the turnaround. That's what we would be looking at," he insisted.

Prior said that the wicket was behaving differently on different days.

"Wicket is certainly turning, you look at day 1 wicket and day 2 wicket - they were different. That's not an excuse at all. We were prepared for it. We have to execute our plans well."

Prior came out in defense of England's top two batsmen --Kevin Pietersen and Ian Bell -- who were dismissed off successive balls against Ojha.

"Bell is one of the finest batters in hitting the ball over the top. One thing we have talked about is to play your game and back yourself and the team will back you the whole way. I think Bell knew the plan he had and what he wanted to do but it did not come off.

"Had it come on everyone would have said what a fantastic shot it was. You cannot question the quality and class of the batting of Ian Bell. We all know his class, and hopefully, he is going to show it (in the second innings)," he said.

"KP is a fantastic player. He is one of our main batsmen but he is only one (there are others) player. We all have to play our own games. I have watched him batting against Morne Morkel (in the last home series against South Africa). I watched him batting in Colombo getting a 150. That was fantastic.

"May be he did not get runs today. As I said, he is one of 11 players. We all need to hold our hand up and we all need to perform. We have a big second innings coming up," he added.

Prior said that if England can get something out of what looks like a lost game after the first-innings collapse, it would be great for the rest of the four-match series.

"Who knows what is realistically achievable? The ball is turning, there is a bit of reverse swing. If we get anything from this game it will be a fantastic effort."

He also came out in support of the Decision Review System, not used in this series as the BCCI and the home side players are against its inaccuracy.

"If there is technology out there which helps and aids in making split-second decisions, then why wouldn't you use it? We have seen a number of series in which it has worked very well. It's not about trying to sneak wickets using technology but about eradicating major errors.

"Some decisions went against us, some against India whatever. If there is a technology available and available in every series, I personally think you should have it," he concluded.