Wasim Akram has said that Mushtaq Ahmed as a spin bowling coach was good for England as it would help them exploit the conditions in the Test series. 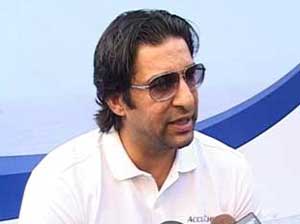 Legendary seamer Wasim Akram feels the presence of former Pakistan leg-spinner Mushtaq Ahmed as a spin bowling coach of England will boost the team and prepare them better to exploit the Indian conditions during the four-Test series starting in Ahmedabad on Thursday.

"The presence of Mushtaq Ahmed will stand England in good stead. Mushy has been with the English team for the last six years and the former Pakistan leg-spinner has built a good bowling unit," Akram said.

"He has not only been a mentor to the English spinners but has also taught the seamers the nuances of reverse spin, which will be very handy on Indian pitches.

"So Duncan Fletcher and MS Dhoni will have to chalk out a strategy to counter the reverse swing which comes into effect just after 10 or 15 overs with the SG ball," he added.

The former Pakistan skipper said England are a formidable side as they have a good bowling and batting attack.

"After a long time this England team looks a formidable lot. So any predication that India will wipe them out 4-nil is being a little overambitious. While I am not willing to predict a scoreline, England will be a difficult team to beat and the visitors have already showed their intentions in the warm-up games in Mumbai and Ahmedabad.

"England have a talented middle-order with Alastair Cook, Kevin Pietersen and Jonathan Trott being the mainstay. And a quality spinner like Graeme Swann and a hard-working seamer like James Anderson give them the balance they need on Indian wickets," Akram said.

The 46-year-old former cricketer also feels in the absence of veterans like Rahul Dravid and VVS Laxman, who retired a few months ago, the onus will be on Virat Kohli and comeback man Yuvraj Singh to steer the batting.

"In the absence of Dravid and Laxman, the onus will be on Virat Kohli. Of course, it's early to compare him to Dravid but he certainly has the talent and the ability to take on any bowling attack in the world. It will be interesting to see how Kohli copes with the pressure of getting runs in every game as Team India will be heavily relying on him," he said.

"Another batsman who can play a vital role is Yuvraj Singh. It was absolutely apt to pick Yuvraj in the Test team. He has made a good comeback after his illness and has been getting runs for India and also in Ranji Trophy.

"The double-hundred in Ranji will give him a lot of confidence. The left-hander will also be a handy bowling option for Dhoni. He can turn the ball well on Indian decks and that will give Dhoni more bowling options," he said.

On India's spin attack, Akram said: "I don't really know what combination the Indian think-tank will pick for the first Test in Ahmedabad. All spinners are experienced and are very dangerous in home conditions.

"Harbhajan Singh, Ravichandran Ashwin and Pragyan Ojha can be quite a handful and with Yuvi being the non-regular option, the Indian spin attack is quite a force," he added.

"England, of course, will be heavily relying on Swann, who has been in tremendous form. Having bagged 192 wickets in 46 Tests, the off-spinner doesn't have the 'doosra' but his variation with pace is tremendous. He will be a big threat to the Indian batsmen," Akram said.

"I firmly believe the team with the better batting will clinch the series. Both teams have the experience to handle panic situations and that will make the series more interesting. And if the warm-up games are anything to go by, England have showed the gumption of taking the fight into the Indian camp," he added.

Comments
Topics mentioned in this article
Cricket India vs England 2012 Wasim Akram
Get the latest Cricket news, check out the India cricket schedule, Cricket live score . Like us on Facebook or follow us on Twitter for more sports updates. You can also download the NDTV Cricket app for Android or iOS.