A light session it was for Team India to kick-off the preparation for the England series. 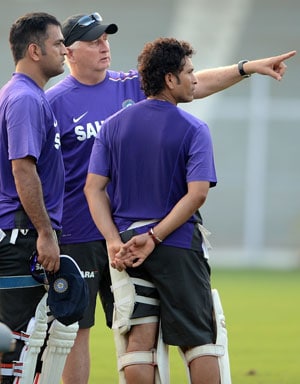 The Indian squad, barring Harbhajan Singh, on Friday had its first day's training session at the Cricket Club of India here ahead of the Test series against England starting November 15.

The light training session started with a stint of football, as has been the custom in recent years, followed by proper net sessions of batting and bowling.

All the batsmen, who are expected to make up the first Test line-up at Ahmedabad from November 15, had a decent stint against the likes of Zaheer Khan, Ishant Sharma, Pragyan Ojha, R Ashwin and local net bowlers.

The focus was on Zaheer, who had had cramps during the Ranji Trophy opener while playing for Mumbai against Railways.

The left-arm pacer had a half an hour bowling stint at the likes of skipper Mahendra Singh Dhoni without going flat out.

Conspicuously absent was Harbhajan, included in the Test squad after being in the wilderness for more than a year. He failed to make it because of a delayed flight, it was learnt.

The off-spinner has the chance to make up for the lost time on the next two full days' training.

After the conclusion of the three-day preparatory camp, the team will depart on November 12 for the Test series opener at the Motera Stadium in Ahmedabad.

The same 15 has been retained for the second match of the rubber at Wankhede Stadium here from November 23. The last two matches of the series will be played at Kolkata (December 5-9) and Nagpur (December 13-17).

The England squad is already in Ahmedabad playing their third and final warm-up tour game against Haryana.