Jonathon Trott struck a century as England piled the runs on the fourth and final day of their warm-up game against Haryana in Ahmedabad on Sunday. Haryana just about managed to hang on for a draw. 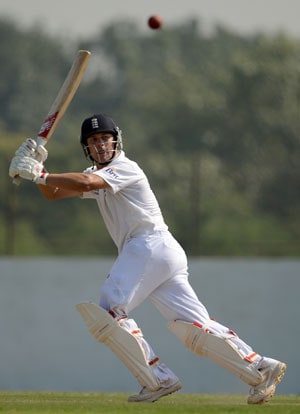 Jonathan Trott hit a century ahead of the Test series against India as England drew their four-day match against Haryana in Ahmedabad on Sunday.

The tourists, who started the final day with a lead of 306 and all 10 wickets in hand, opted to bat on and made 254-6 in their second innings before declaring in the post-lunch session.

Haryana, set an improbable 442 to win, were in danger of losing when they collapsed to 110-6, with seamer Tim Bresnan grabbing two wickets for 13 runs in seven overs.

But both teams agreed to call off the match when 10 overs still remained to be bowled, with the hosts on 133-6.

Trott, who was on 61 overnight, scored 101 before he retired to give other batsmen an outing in the middle before the four-Test series opens at the Motera stadium in Ahmedabad on Thursday.

Opener Nick Compton, who is almost certain to make his debut in the first Test, scored 79 and Ian Bell made 48.

Meanwhile, England's fast bowling duo of Stuart Broad and Steven Finn worked out at the nets on Sunday, raising hopes they will be fit for the Ahmedabad Test.

Finn had suffered a thigh strain in the tour opener in Mumbai, while Broad bruised his right heel in the second practice match.

Off-spinner Graeme Swann flew home last week to attend to his sick daughter but will rejoin the squad on Monday, the team management announced.

The Indian team led by Mahendra Singh Dhoni will reach Ahmedabad on Monday from Mumbai where they had a short three-day training camp to prepare for the series.

Comments
Topics mentioned in this article
Cricket India vs England 2012 HAR England Cricket Team West Indies Cricket Team Australia Cricket Team Jonathan Trott
Get the latest Cricket news, check out the India cricket schedule, Cricket live score . Like us on Facebook or follow us on Twitter for more sports updates. You can also download the NDTV Cricket app for Android or iOS.