It was a fantastic effort from bowlers: MS Dhoni

Indian skipper Mahendra Singh Dhoni on Monday credited the bowlers for his team's nine-wicket victory over England in the opening cricket Test here, saying that the spinners put in a lot of hard work on a wicket that did not offer much turn. 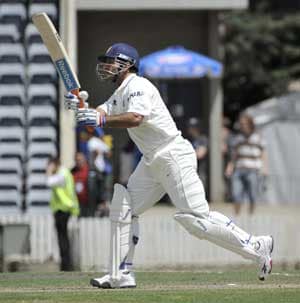 Indian skipper Mahendra Singh Dhoni on Monday credited the bowlers for his team's nine-wicket victory over England in the opening cricket Test here, saying that the spinners put in a lot of hard work on a wicket that did not offer much turn.

After India scored 521-8 declared in the first innings, it was the bowlers, especially the spinners, who set the stage for the team as they dismissed the English team twice.

"There was something in the wicket to start with but as the game progressed there was low bounce but not much turn. It was hard work for the spinners. They bowled 70-80 overs, even fast bowlers bowled overs 40 overs. So it was a fantastic effort from them," Dhoni said.

"Even if you misjudged the flight you had time to adjust and not much carried to the slips. So it was important to bowl at the right areas and was also important not to give many runs. Ojha bowled a tight line and took extra responsibility."

The India skipper also had good things to say about man of the match Cheteshwar Pujara who scored an unbeaten double ton in the first innings and was not out at 41 in the second.

"It was a fantastic game for Pujara. He has the temperament to play big innings and has shown that on the domestic circuit. He makes sure he converts fifties to hundreds. Overall it was a fantastic effort by the team," he said.

Dismissed for 191 in their first innings, England put up a commendable performance in their second essay, scoring 406 after following on.

India then overhauled the 77-run winning target, scoring 80 for one in 15.3 overs to go one up in the four-match series.

England skipper Alastair Cook, who starred with an epic 176-run knock in the second innings, lauded the fighting spirit of his team and vowed to come back stronger in the second Test in Mumbai.

"We can look at a number of reasons why we didn't win, our first innings was not good enough. But it was a great fightback in the second innings, we were in a tough situation and there was always a glimmer of hope, it had to be something special," Cook said.

"It was a challenge, we knew me and (Matt) Prior needed to do majority of the work and there was inspiration at the beginning of the day. The guys showed a lot of character.

"We'll work hard going into Mumbai. We need runs in the first innings, they are crucial in the sub-continent, and we need to keep working as hard as we can and play close to our potential," he added.

Meanwhile, Pujara said the wicket was easy to bat on.

"The ball was coming nicely onto the bat. There was turn, but it was slow. As a team we knew we had to put up 500-plus and I had to hang around to play my role.

"In the second innings the ball was hard and I had a lot of confidence. I was out for almost a year and since I'm back I'm enjoying it."

Comments
Topics mentioned in this article
Cricket England Cricket Team India Cricket Team India vs England 2012 MS Dhoni Yuvraj Singh Suresh Raina
Get the latest Cricket news, check out the India cricket schedule, Cricket live score . Like us on Facebook or follow us on Twitter for more sports updates. You can also download the NDTV Cricket app for Android or iOS.