Virat Kohli, Pujara and R Ashwin to be India's slip fielders in Tests vs England?

In an intense slip catching session, Cheteshwar Pujara, Virat Kohli and R Ashwin showcased good reflexes. So , will it be the young trio or the tried and tested ones like Virender Sehwag? 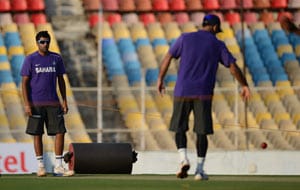 The Indian cricket team, which arrived here this morning, had a rigorous fielding practice session ahead of the first Test against England, beginning November 15 here.

While coach Duncan Fletcher was giving the trio slip catching practice, at the other end of the ground, players were divided into two groups and were involved in outfield catching and throwing practice. With the exception of lanky pacer Ishant Sharma, all other members of the Indian squad attended the session.

The close to two-hour practice session ended with players taking to football. The football match was keenly contested.

Before the practice session, Dhoni and Fletcher had a good look at the centre wicket which is likely to used for the first Test.

The England team arrived last week and played a practice match against Haryana at Motera 'B' ground here.