India vs England first Test Preview: Visitors out to challenge history and spin

England will definitely be looking to counter spin but India must not be complacent with Graeme Swann in the opposition. It will, in all probability, boil down to the fact that how the 'Barmy Army' bats in sub-continent conditions. They did impress when they last toured Sri Lanka and Swann did play a huge part then too. 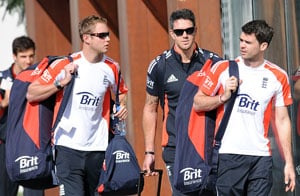 England face a perilous trial by spin as they bid to win their first Test series in India in 27 years when the four-match contest opens in Ahmedabad on Thursday.

The newly-laid wicket at the Motera stadium, expected to assist spin over the five days, will suit a home team desperate to avenge the 4-0 humiliation in England last year.

England proved vulnerable against the turning ball away from home this year, losing 3-0 to Pakistan in the United Arab Emirates in January-February before forcing a 1-1 draw in Sri Lanka in March.

The tourists now confront an Indian side that usually makes up for its poor record abroad by dominating all comers on home soil where they have lost just one series out of 16 in the past 10 years.

India will use two frontline spinners -- possibly three if a rank turner is provided -- to bamboozle England in the four Tests in Ahmedabad, Mumbai, Kolkata and Nagpur.

Waiting in the wings is recalled off-spinner Harbhajan Singh, whose 406 scalps in 98 Tests make him the world's leading wicket-taker among the current crop of bowlers.

Dhoni, under pressure to deliver after India's two successive 4-0 defeats in England and Australia, has openly called on groundsmen across India to prepare turning wickets that will shake-up the tourists.

"England have not convinced anyone that they can play the turning ball," Boycott told the Cricinfo website recently. "I don't think they have convinced themselves. Nobody in their right mind can back England."

The tourists go into the first Test with all their top batsmen finding form in the three warm-up matches, albeit against mediocre opposition lacking top-class spin bowlers.

Cook, the recalled Kevin Pietersen, Jonathan Trott, Samit Patel and Jonny Bairstow have all hit centuries, while Nick Compton set himself up for a debut in Ahmedabad with three successive half-centuries.

James Anderson will spearhead the pace attack which is expected to be at full-strength after Steven Finn and Stuart Broad recovered sufficiently from injuries to make themselves available for selection. 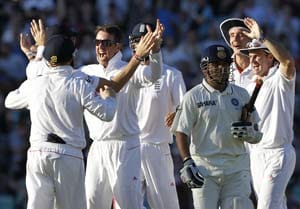 Off-spinner Graeme Swann, who flew home briefly to attend to his sick daughter, will return as the frontline slow bowler with support from Patel and Monty Panesar.

India had an emphatic 2-0 Test win at home against lowly New Zealand in August before being ousted in the second round of the World Twenty20 in Sri Lanka.

Sachin Tendulkar's future will be a talking point during the series after the record-breaking batsman admitted last month that the clock was ticking on his 23-year career.

Tendulkar, who has scored an unprecedented 100 international centuries, has now gone 25 innings without a Test hundred since making 146 against South Africa in Cape Town in January 2011.

He was bowled in all three innings against New Zealand with a top score of just 27, raising fears that age may finally be catching up with him.

Another poor display against England could hasten Tendulkars' exit, leaving a gaping hole in a middle order already wobbling after the retirement of Rahul Dravid and VVS Laxman this year.

Tendulkar cautioned India against taking England lightly, saying his team's dominant home record will not count when the first ball in the series is bowled on Thursday.

"Whatever happened in the past does not matter," he said recently. "England are a good side and it will be a close and interesting series."