What will happen in the Tests, time shall tell but for the meanwhile Kevin Pietersen and England have settled in Indian conditions quite well, at least their batting department. 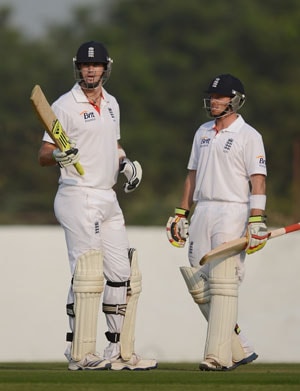 Comeback man Kevin Pietersen's whirlwind century against Haryana in the last warm-up game not only augurs well for the flamboyant right-hander but also for England ahead of the four-Test series against India, said visiting middle-order batsman Ian Bell.

Bell, who himself ended the day on unbeaten 57, feels the century could not have come at a better time for Pietersen, who retired after scoring a quick-fire 110 off 94 balls to make way for other batsmen.

"It was good for him to get into the groove. It will help him to settle down in the team. It is also a positive sign for the team," he said at the press conference after the opening day's play of the four-day match.

"Batting with him releases pressure," Bell said about Pietersen, who will make a comeback into the England team in the upcoming Test series following the controversial text-message row.

Speaking about his own innings, Bell expressed satisfaction over the amount of time he had spent on the wicket today ahead of the series against India, which commences here on November 15.

"It was good to spend some time in the middle and get some runs under the belt ahead of the opening Test match.

"The wicket was an excellent one to bat on. The ball was skidding on nicely," he said.

He also said that it was a pleasant experience to bat against leg-spinner Amit Mishra ahead of the Test series.

"He (Amit) is a quality leg-spinner. He has played quite a lot of Test matches. It was good to bat against him," Bell said of the Haryana skipper, who was the only player to have played international cricket in England's rival team.

Bell was in no mood to give much attention to injuries to pacemen Steve Finn and Stuart Broad, who sat out of the ongoing practice game.

"It's not an issue. I am sure they will be fit for the first Test," he quipped.

England raced to 408 for three on the first day against a weak Haryana attack that lacked precision and incisiveness.

Apart from Pietersen and Bell, captain Alastair Cook (97) and Nick Compton (74) also made useful contributions with the bat.

Comments
Topics mentioned in this article
Cricket England Cricket Team Michael Clarke Kevin Pietersen India vs England 2012 Ian Bell India Cricket Team
Get the latest Cricket news, check out the India cricket schedule, Cricket live score . Like us on Facebook or follow us on Twitter for more sports updates. You can also download the NDTV Cricket app for Android or iOS.