England on top against Haryana after Day 2

England reduced Haryana to 172/4 in their 1st innings in the four-day practice game at Ahmedabad. Earlier, England has finished on 521/9. 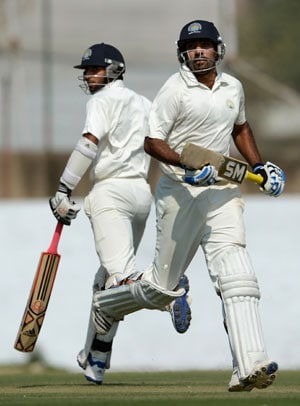 Opener Rahul Dewan hit a fighting unbeaten half-century after bowlers shot out England in the morning session as Haryana put up an improved show against the visitors on the second day of the warm-up game, here today.

Haryana spinners took five of the six wickets that fell in the day although England scored at a brisk pace, adding 113 runs in 28.2 overs after resuming at 408 for three.

Dewan (77) and Sandeep Singh (2) were at the crease for Haryana when stumps were drawn for the day.

England lost the last five wickets for just 14 runs as they went after the bowlers.

Sachin Rana provided the first breakthrough when he dismissed Ian Bell (62). Samit Patel and Matt Prior (41) added quick 69 runs for the fifth wicket but once the latter was stumped off Jayant Yadav Yadav, England's innings fell apart.

Dewan and Sunny Singh (55) then put on 97-runs for the second wicket in a strongÂ  reply to England's mammoth total but Haryana are still trailing by a huge 349-run margin.

Sunny Singh joined Dewan and the duo took Haryana to 103 for one at tea. Dewan has faced 181 balls so far and helped himself with 10 shots to the fence.

After the interval, Sunny Singh rolled his wrists nicely to pull a short ball off Graham Onions to the square-leg boundary to reach his half-century.

He, though, could not stay long and was out in the next over caught by Trott in the slips off the bowling of local lad Samit Patel.

Haryana lost three wickets in the final session of the day when Matt Prior was replaced by Jonny Bairstow for the wicket-keeping duty. Prior is said to have an upset stomach.

Abhimanyu Khod (3) was caught nicely in the slips by Trott off Bresnan while left-arm spinner Monty Panesar trapped Sachin Rana (6).

In the morning session, Bell was the first batsman to be dismissed, adding just five runs to his overnight score of 57, caught by Nitin Saini off Rana.

Samit Patel, who began the day at his overnight score of 11, helped himself to a composed half-century (67) even as Matt Prior (41) attacked from the other end.

Yadav sent back Prior to break the partnership and then also dismissed Bresnan (3) and Patel.

Mishra then took the last two wicket by accounting for Stuart Meaker (0) and Graham Onions (2).

Speaking at the end of day's play, Bresnan, who is vying for the third seamer's slot, said, "The key to taking wickets on Indian pitches is to bowl straight. Or, (in a lighter vein) be a spinner."

The track, Bresnan quipped, offered no bounce, seam or spin for bowlers to trouble the batsman.

The Yorkshire pacer said it would be difficult to get 20 wickets on these pitches, adding that the wickets for the Tests would be no different.