A major blow was dealt to England's plans as Stuart Broad bruised his left heel in the match against Mumbai A. He will now be observed for the next few days to determine his fitness. 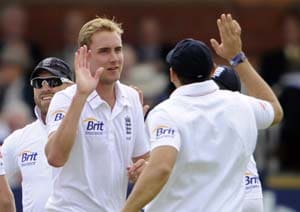 Stuart Broad joined fast bowler Steven Finn on England's injured list ahead of the Test series in India as the three-day tour match against Mumbai 'A' ended in a draw on Monday.

Vice-captain Broad bruised his left heel and team doctors were monitoring his progress just 10 days before the first Test of the four-match series starts in Ahmedabad on November 15.

"Scans show Broad has a bruised left heel. Progress will be monitored over next couple of days," team spokeswoman Rhian Evans said during the final day's play at the DY Patil stadium.

With fellow fast bowler Finn being treated for a thigh strain, England's team management remained undecided over the composition of the bowling attack for the series opener.

Surrey paceman Stuart Meaker, who has been called up as a precautionary cover, is expected to join the tourists ahead of their last practice match in Ahmedabad from Thursday.

England grabbed eight wickets for 76 to dismiss Mumbai 'A' for 286 after the home team were cruising at 210-2 on Sunday afternoon in reply to England's 345-9 declared.

Hiken Shah, who was on 84 overnight, missed a century when he was caught behind off seamer Graham Onions for 92.

Samit Patel picked up three wickets with his left-arm spin to further enhance his Test claims after knocks of 104 and 60 in the two practice games so far.

England, who led by 59 runs on the first innings, were 149-2 in their second knock when the match was called off.

Nick Compton, grandson of former England batsman Denis Compton, scored a dour 64 not out off 162 balls to become the frontrunner for the opener's slot in the first Test alongside skipper Alastair Cook.

Comments
Topics mentioned in this article
Cricket India vs England 2012 Stuart Broad Jonny Bairstow Hiken Naresh Shah Cheteshwar Pujara
Get the latest Cricket news, check out the India cricket schedule, Cricket live score . Like us on Facebook or follow us on Twitter for more sports updates. You can also download the NDTV Cricket app for Android or iOS.