Sehwag and Gautam Gambhir have struggled to cobble together sufficiently big opening partnerships for the rest of the batting line up to build upon. Dhoni, however, sounded unfazed about the criticism he and the team had to go through after a series of losses. 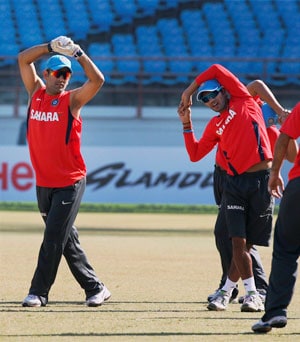 "Well it (ODI debut) looks very unlikely as of now because we have to see the whole batting line-up the position he's ideally suited for and all those things. As of now, it looks very unlikely," said Dhoni on the eve of the first ODI against England at the SCA stadium here.

"Let's see what happens tomorrow. If somebody gets unfit, we'll see...," he added.

Pujara, who notched up 352 this morning in the Ranji Trophy quarterfinal match against Karnataka, has played nine Tests with distinction for the country and has scored three hundreds and a fifty in his fledgling international career.

The 24-year-old cricketer has been included in the ODI squad for the first time in place of Virender Sehwag.

Instead of practicing with the rest of the Indian team, Pujara continued batting in the Ranji Trophy game after getting permission from the team management.

Dhoni conceded that the lack of big opening partnerships has hurt the World Cup champions' chances in ODIs off late.

Sehwag and Gautam Gambhir have struggled to cobble together sufficiently big opening partnerships for the rest of the batting line up to build upon.

"The stats suggest that for quite some time we have not got off to a very good start in terms of a (opening) partnership. Yes, the openers have been scoring runs on and off, but we have not been able to get a good partnership between them. One of them has been getting out. We are hoping to get good starts in this series.

Jinx (Ajinkya Rahane) is the new opener. He has played on and off and done decently well," said Dhoni.

Dhoni, however, sounded unfazed about the criticism he and the team had to go through after a series of losses.

"It (criticism) is not something that's new to us. As Indian cricketers, you know you are supposed to do well. The moment we don't do well as an individual or as a team you know you'll get to face a lot of criticism," said the skipper.

"But it's the same when you do well, then you get a lot of appreciation. I've always said it's very important to be in a good zone as a team, because if you are in a good zone you have more chances of being successful and be able to perform.

"I never question my ability. That's one thing that all the weaker persons do. Before others question you as an individual you start questioning yourself. Self-belief is something that's very important. Especially in a team sport, it's important that everybody keeps believing in themselves and understands the roles and responsibilities that they've got," he added.

Reluctant to talk about giving up the captaincy in one or more forms of the game as suggested by some former cricketers, Dhoni said, "We'll have to wait and watch. It's not something that's on my mind right now, before the start of an important series. We can't be thinking about that now. Let's wait and watch when we get some time off."

Dhoni conceded that switching from one format to another in a short span was always a difficult thing to do but was happy that the team was continuing to play the five-match ODI series on the back of the three-game series that it lost 1-2 against Pakistan.

"It's quite difficult when you're switching formats, from the longer format to the shorter format. Getting into the T20 version is a different challenge altogether. But as an individual, at the top level, you are supposed to stand up to the kind of challenge that's provided for you.

"It is tough, but the good thing is we have played three ODIs, which means we have got a fair amount of exposure in the format. The last game was especially good for us, the way we won a low-scoring game. But the conditions are very different out here, so let's see how it goes", Dhoni said. "India defended a small total with aplomb in the inconsequential third and last ODI game in Delhi against Pakistan in bitterly cold conditions and the track at the newly built Stadium here appears to be full of runs. The Ranchi-born wicketkeeper batsman, who has so far played 214 ODIs since making his debut in 2004 in Bangladesh, sounded very happy that he would be -- for the first time --playing an international game in his home town, which is hosting its first-ever ODI "It's a big thing for me. We had an international stadium, the Keenan Stadium (Jamshedpur) where we played a few games. I think the last game we played was against England (in 2006) where we lost. But it was a beautiful stadium.

"It's very important for the local associations to have their own ground. It's a big effort from all the association from the President, the Secretary and all the people involved. I think overall it will be nice. We'll be playing there after a long time. What we have seen in the small venues is they attract a lot of fans, who come and support good cricket.

"I think overall it will be very exciting. And also, it gets international recognition to the cities that have international stadiums. When I came it was difficult to make people understand which place or city I was from, but once we have an international venue, people outside will recognise the city quite easily. It's good for the state and very good for our city," said Dhoni.

He, however, insisted that it is the Rajkot game he would be focussing on tomorrow.

"As of now, tomorrow's game is the most important, but as I said, it will be a different feeling for me, to go and play in Ranchi after a long time. It's quite similar to the first first-class game I played in my city. But it's very important to stay in the present. From here we move on to Kochi, so let's take care of this game first and then we'll go to Kochi (for the second ODI on January 15). Ranchi will happen (on January 19), nothing really can stop it," he added.

The Ranchi stadium got approval from the International Cricket Council as an ODI venue last October.

Comments
Topics mentioned in this article
Cricket India vs England 2012 Yuvraj Singh Shane Watson Virender Sehwag Suresh Raina MS Dhoni Ajinkya Rahane Cheteshwar Pujara
Get the latest updates on ICC T20 Worldcup 2022 and CWG 2022 check out the Schedule, Live Score and Medals Tally. Like us on Facebook or follow us on Twitter for more sports updates. You can also download the NDTV Cricket app for Android or iOS.