India made a triumphant start to the series after beating England by nine wickets in the first Test in Ahmedabad. 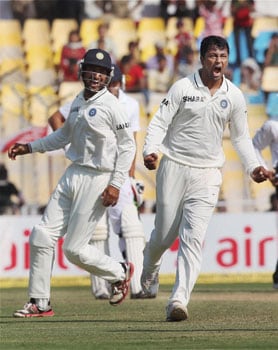 Virender Sehwag and Cheteshwar Pujara turned in an exhilarating batting display on a fifth-day track to complement a superb performance by the bowlers on the final morning as India surged to a nine-wicket victory, less than an hour after lunch, in the first Test against England at Motera in Ahmedabad on Monday (November 19).

After Pragyan Ojha had ended England's resistance by getting rid of Matt Prior and Alastair Cook, the two overnight batsmen, India lopped off the tail to bowl England out for 406 at the stroke of lunch.

Needing 77 for victory upon resumption, Pujara came out to open the batting with Sehwag following the non-availability of Gautam Gambhir, who missed the entire fourth day's play as well as the first session on day five after having flown to New Delhi following the demise of his grandmother.

Sehwag and Pujara lay into the England bowling with a succession of brilliant strokes while adding 57 in just 59 deliveries. Pujara, in prime touch after his double hundred in the first innings, drove Graeme Swann against the turn through mid-off with great felicity while Sehwag too batted like a man with his confidence high, given that he had ended a two-year drought with a century in the first innings.

Sehwag was caught at long-on trying to cart Swann out of the ground to gift England a token wicket, but India rattled along to 80 for 1 in just 15.3 overs, making sure England didn't have too much confidence to take into the second Test so far as their bowling is concerned.

England will take more heart from their second-innings batting effort after having been rolled over for just 191 in the first, though India's bowlers came back strongly on the final morning.

Overnight 340 for 5 and ahead by 10 runs after trailing by 330 on the first count, England were bowled out for 406 just before lunch. Ojha did the early damage, getting rid of both overnight batsmen by first accounting for Prior, then snaring Cook, whose long vigil was ended by a delivery that kept low, turned and skidded through to hit the off-stump.

Buoyed by having dismissed the man who had steadfastly baulked them for the entire fourth day with one of the finest innings on Indian soil, India kept coming hard at England on a track that played more tricks than before, several deliveries shooting through and making life very difficult for Mahendra Singh Dhoni.

As is his wont, Dhoni began the day with pace at one end and spin at the other, but India had to wait until the 10th over the day before breaking through. A short delivery from Ojha elicited a strange stroke from Prior that flew back high to the bowler's right, Ojha taking a smart catch to end a partnership of 157. Prior, who had batted quite beautifully, was dismissed for 91.

Cook, though, carried on and on. He was particularly watchful after Prior's dismissal, but a rare lapse in concentration finally saw his back as he played a tired stroke and trudged back to the pavilion, having played 374 deliveries and struck 21 fours during his remarkable 176.

Sensing an opening, India were all over England, Umesh Yadav having Stuart Broad caught and bowled with a delivery that stopped on the batsman.

Tim Bresnan and Swann added 28 valuable runs for the ninth wicket when R Ashwin, eventually introduced in the day's 24th over, got Swann on the reverse sweep. Zaheer Khan, who like Yadav bowled beautifully throughout the innings, had Bresnan smartly caught in the covers by Ajinkya Rahane, the substitute, as England were eventually bowled out with lunch imminent.

Comments
Topics mentioned in this article
Cricket England Cricket Team India Cricket Team India vs England 2012 Pragyan Ojha Alastair Cook MS Dhoni
Get the latest updates on India vs Australia Series, check out the India vs Australia Schedule for 2020-21 and Ind vs Aus live score . Like us on Facebook or follow us on Twitter for more sports updates. You can also download the NDTV Cricket app for Android or iOS.