Not a single Indian features in the top-20 of ICC's batting chart but Cheteshwar Pujara, who struck a doubled hundred in the Ahmedabad Test, has rocketed 35 places to the 24th position. 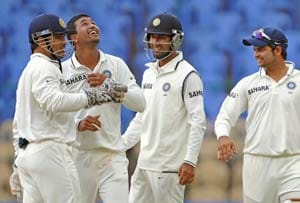 Following his match winning knock of 206 runs in the Ahmedabad Test against England, India batsman Cheteshwar Pujara has rocketed 35 places to 24th position in the ICC Test rankings for batsmen.

India defeated England by nine wickets in Ahmedabad, with Pujara picking up the man of the match award. But he is not the only Indian to have moved up in the Test rankings.

The 26-year-old, who recorded match figures of 77.2-24-165-9, has broken into the top five for the first time in his career after jumping nine places in the bowler rankings.

On Monday, Sri Lanka beat New Zealand by 10 wickets in Galle, with Rangana Herath collecting the player of the match award, and on Saturday Kieran Powell was adjudged man of the match in Mirpur where the West Indies overpowered Bangladesh by 77 runs.

But Pujara and Powell are not the only batsmen to make upward movements in latest rankings which were released on Monday evening.

England captain Alastair Cook, who scored a gutsy 176 in his side's second innings, has returned to the top 10 by rising four places to seventh.

Sri Lanka captain Mahela Jayawardene has jumped six places to 13th position after scoring a classy 91 in the first innings, while Matt Prior has become the fifth England batsman inside the top 20 after achieving a career-best ranking of 18th.

Sri Lanka's Angelo Mathews' contribution of 79 runs in a 156-run sixth wicket partnership with Jayawardene has given him a career-best ranking of 28th, New Zealand's Daniel Flynn's contributions of 53 and 20 has allowed him to improve his ranking by five places and he is now in 63rd position, Denesh Ramdin's third career century for the West Indies has vaulted him seven places to 68th position while Bangladesh's Nasir Hossain's effort of 96 and 21 has lifted him from 85th spot to 69th position.

Meanwhile, South Africa's Jacques Kallis will enter the Adelaide Test against Australia as the number-one ranked Test all-rounder, while team-mates Hashim Amla and Vernon Philander will have opportunities to top the batting and bowling tables, respectively.

While Kallis will be eyeing to cement his number-one spot in the Adelaide Test, Amla will be aiming to leapfrog Sri Lanka's number-one ranked Kumar Sangakkara, and Philander will have his new ball partner and number-one ranked Dale Steyn firmly within his sights.

Amla, who is already enjoying his career-best rating, trails Sangakkara by just four ratings points and a good performance with the bat will mean that he will become one of the very few batsmen to top both the Test and ODI batting tables at the same time.

Philander is 19 ratings points behind Steyn, who has been holding the number-one spot since July 2009. Philander has played a total of 11 Tests, in which he has taken 63 wickets. As such, he is still in the qualification period for bowlers as a bowler qualifies for a full rating when he reaches 100 Test wickets.

This means Philander could potentially overtake number one Steyn, depending on how both the bowlers perform in Adelaide.

Comments
Topics mentioned in this article
Cricket India vs England 2012 Pragyan Ojha England Cricket Team India Cricket Team Cheteshwar Pujara
Get the latest Cricket news, check out the India cricket schedule, Cricket live score . Like us on Facebook or follow us on Twitter for more sports updates. You can also download the NDTV Cricket app for Android or iOS.