"The Board has written a letter to us asking for an explanation on the issue and we have forwarded that to Mr Vijay Patil (boss of the D Y Patil Academy) asking him to reply last week. We will forward his reply to the BCCI. It's a question of not following the proper protocol," said MCA president Ravi Savant. 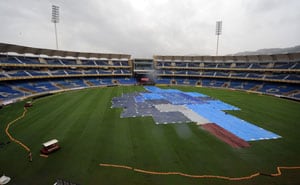 The BCCI has sought an explanation from the Mumbai Cricket Association for hosting England's Performance Programme squad's practice session at its D Y Patil Sports Academy in Navi Mumbai without seeking the parent body's permission.

The BCCI has also written a letter to the England and Wales Cricket Board asking why they did not follow the correct protocol of asking its permission to have ECB's second-string squad practising in India, it was learned.

"The Board has written a letter to us asking for an explanation on the issue and we have forwarded that to Mr Vijay Patil (boss of the D Y Patil Academy) asking him to reply last week. We will forward his reply to the BCCI. It's a question of not following the proper protocol," said MCA president Ravi Savant on Monday.

Patil is, incidentally, a vice president of the MCA.

It has also been learned from other quarters that the miffed BCCI has raised the issue with the ECB and has also got a reply from the latter, but whether the England board has apologised for not following the protocol is not known.

What has raised the concern of the Board is that a few members of the England Test squad, notably injured fast bowler Steven Finn and Joe Root, had gone and practised at the D Y Patil Stadium even as the ECB had sought and demanded tight security for their squad members, who are involved in a four-Test series against the host country's team.

Finn has not been seen in action in the two Tests that have been played so far.

He picked up a thigh injury in the tourists' opening warm-up game in the Cricket Club of India where he bowled just 10 overs before limping off and was not fit for selection for the first two Tests in Ahmedabad and Mumbai.

Finn bowled in the second-string squad's game against the academy team last week and picked up four wickets for 50 while Root, considered as the third opener in the Test squad, scored a century and was impressed with the fast bowler's return to fitness.

"He (Finn) bowled fantastically well, and got some wickets and good overs under his belt. I think he's pretty happy with where he's now, and it will be interesting to see how things go over the next three days in training," he was quoted of saying in the ECB website ahead of the third Test at Kolkata starting in two days' time.

Stuart Meaker, brought in as cover for Finn, and Graham Onions, two other members of the Test party, also played in the game against D Y Patil Academy XI.

Also in the EPP team are Danny Briggs, who has been included in both the ODI and T20 squads, Jos Butler and Jade Dernbach who are in the T20 squad.

All of them are gaining valuable practice much ahead of the T20 series to be held in Pune and Mumbai on December 20 and 22 followed by the five-match ODIs commencing on January 11, 2013 at Rajkot.

Meanwhile, the EPP squad members are scheduled to play one more practice game, commencing today at the D Y Patil Stadium before moving on to Pune to play three limited over matches against the visiting Netherlands outfit at the Poona Club on December 13, 14 and 16.

On another front, the ICC had issued a media release on November 27 about the Netherlands' team's programme in India which included matches against the EPP squad.

"The Netherlands cricket team has arrived in Dubai for a month-long tour of the United Arab Emirates (UAE) and India. One of the top ranked Associate Member (AM) countries, the Netherlands is training at the world-class facilities in Dubai of the ICC Global Cricket Academy (ICC GCA) in preparation for three one-day matches against UAE teams before travelling to India, where it will play three matches against the England Performance Programme Squad and two against a Mumbai XI," said the ICC release.

"Netherlands receives assistance from the ICC's dedicated High Performance Programme (HPP), which provides targeted support to high performing AMs. The side is planning ahead for an important year of international cricket.

"Netherlands will take on fellow AM Namibia in round five of the Pepsi ICC World Cricket League (WCL) Championship and the ICC Intercontinental Cup 2011-2013 in April 2013, before taking part in the ICC World Twenty20 Qualifier in November," the release added.

Comments
Topics mentioned in this article
Cricket Sachin Ramesh Tendulkar India vs England 2012 Dr DY Patil Sports Academy, Navi Mumbai
Get the latest Cricket news, check out the India cricket schedule, Cricket live score . Like us on Facebook or follow us on Twitter for more sports updates. You can also download the NDTV Cricket app for Android or iOS.