The tourists end the opening day of the match on 338/6. 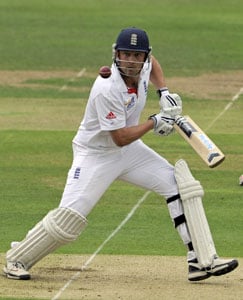 Jonny Bairstow hit a century to spare England's blushes on Saturday, after a dramatic collapse on the opening day of the three-day tour match against Mumbai 'A'. The team finished the day on 338/6.

The tourists slipped to 66-4 in the first session after electing to bat, before Bairstow's rescue act steered them to 338 for six by stumps at the DY Patil stadium on the outskirts of Mumbai.

The 23-year-old made 118 with the aid of 14 boundaries to put himself in contention for the first Test against India starting in Ahmedabad on November 15.

Bairstow put on 156 for the fifth wicket with Eoin Morgan (76) and 107 for the sixth with Samit Patel, who followed his century in the tour opener against India 'A' with an unbeaten 59.

England's search for an opening partner for skipper Alastair Cook after the retirement of Andrew Strauss did not make any headway as both Nick Compton and Joe Root fell cheaply.

Compton, grandson of former Test batsman Denis Compton, scored zero and one in the two innings he has played so far on the tour, while Root fell for 28 on Saturday.

The tourists rested Cook and star batsman Kevin Pietersen for the match against a makeshift Mumbai team comprising players not selected for the ongoing Ranji Trophy first-class match.