Cook said England will have to consistently maintain their standard of performance if they desire to beat India in the ODI series after the triumph in the Test rubber. 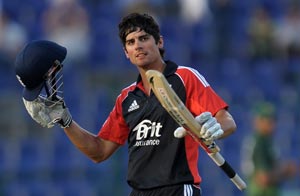 England captain Alastair Cook said even though they have made a "great start" to the series, he is no mood to take a "world-class" India lightly in the second ODI here on Tuesday.

Cook said England will have to consistently maintain their standard of performance if they desire to beat India in the ODI series after the triumph in the Test rubber.

"It is obviously a great start to the series when you win the first game. It was an important game to win. But now we have to move on. Hopefully, we can keep up the standard of our performances and win the upcoming game," he said on the eve of the second ODI at the Nehru Stadium.

"They're (India) a world-class side and statistics show how hard it is to win here, but we're prepared for that. We will have to keep up our skills and our standard of performances, if we want to win this game and the series," Cook added.

Cook backed his pace duo of Steven Finn and Jade Dernbach to come good tomorrow even though they leaked a few runs in the first ODI at Rajkot.

"On that wicket (at Rajkot) it was incredibly hard for us to bowl. It was a really quick outfield. It was probably one of the fastest wicket I've played. There was no margin for error, everytime you stray slightly it was easy for batsmen.

"It was a very, very tough job and those two (Finn and Dernbach) held their nerves. They got hit for a few, but they put it to bed and came in the next ball and tried to get it better. We know how hard bowling in the first 10 overs are.

Those two handled the first 10 overs very well, which is probably the most important thing," he said.

The English skipper also came in support of his part-time spinner Joe Root, who bowled nine overs in the first ODI and gave away 51 runs without any success.

"I thought Joe did really well. It was only the last couple of over, those were big runs. But I thought he handled the pressure of being a part-time bowler really well. He was fantastic. I hope to be able to use him at some stage of the game," Cook said.

"He is an old head on young shoulders. He is still a very young player and he has huge amount of learning to do and he knows that."

Asked whether he was looking at spin duo Root and James Tredwell to do the job for him in the ODIs just like what Monty Panesar and Graeme Swann did for the side in the Test series, Cook said: "I certainly have that thought."

"In Tests matches we bowled very well. Monty and Swanny really showed what world class bowlers they are. In the first ODI, it was Tredwell. He has been around for a while now and he just proved that with experience you can achieve success."

Cook said he will continue to rotate himself so as to help England build a strong base.

"I have always said that I wanted to play as much cricket as I can for England and whenever I can. But rotation is going to be a part. Luckily we are building a squad of guys who have been around for six, eight months in international cricket and they are gaining experience," he said.

"I thought I won't play any cricket for the ODI side but right now I am feeling very fresh and I am feeling excited by the challenges," Cook added.

Asked what would be a good score on this wicket in Tuesday's game, Cook said: "I think that is one of the skill that you need as a top-order batsman to be able to assess the conditions quickly and know what a good score will be. But it also depends on the out-field , the kind of wicket."

Comments
Topics mentioned in this article
Cricket India vs England 2012 India Cricket Team England Cricket Team Alastair Cook
Get the latest updates on India vs South Africa and check out  Schedule, Results and Live Score. Like us on Facebook or follow us on Twitter for more sports updates. You can also download the NDTV Cricket app for Android or iOS.