Ravindra Jadeja impressed with all-round abilities while Bhuvneshwar Kumar in bowling and MS Dhoni (as usual) in batting led India's charge on a sultry day in Kochi. 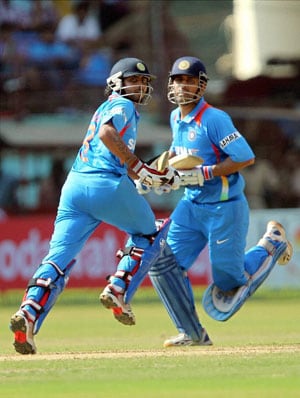 A terrific batting display complemented some big hitting with the bat for India against England as they ran riot and secured a massive 127-run victory in the second One-Day International in Kochi on Tuesday (January 15). Having set England a target of 286, India put up an energetic display with the ball and in the field, much to the delight of a capacity crowd at Jawaharlal Nehru Stadium, and bowled out England for just 158. The victory meant India levelled the five-match series 1-1 and head to Ranchi on an even footing.

After opting to bat, India scored steadily but never really looked in control till Ravindra Jadeja and Mahendra Singh Dhoni stepped on the pedal in the final ten overs. They added 96 runs for the sixth wicket in just 60 balls, powering India from what looked like a middling total to a commanding one, their stand studded with 13 fours and three sixes.

England, in their chase, found Bhuvneshwar Kumar in outstanding form. So impressive was Bhuvneshwar that Dhoni used all his ten overs in one spell, which returned figures of a stunning 3 for 29. He was well supported by Shami Ahmed, chosen ahead of Ashok Dinda in the playing XI, whose dismissal of Ian Bell (1) in his first over started things off.

Alastair Cook, the captain, and Kevin Pietersen set about reviving England. They put up a fairly exciting 54 for the second wicket with Pietersen on the offensive. Shami did trouble Pietersen in one spell, even inducing an edge that just escaped the slips and raced to the boundary. In response, Pietersen whipped him through midwicket for four and then, in the last ball of the over, his mistimed shot - intended for square-leg but ending up at point - went for another boundary.

There was a run out opportunity too, when Cook hesitated after Pietersen called for a quick single. However, the onrushing Jadeja couldn't collect the ball cleanly on the first time of asking, and the chance was gone.

The two were beginning to take control when Bhuvneshwar got into the act. He trapped Cook plumb in front, and not long thereafter, swung one in and Pietersen had his stumps disturbed - the animated celebrations and the crowd's frenzy showing the importance of the wicket. The new man - Eoin Morgan - lasted all of two balls, with Bhuvneshwar inducing an edge that was well caught by Dhoni.

Bhuvneshwar's three wickets took the fight out of England. They were four down at 73 and the mini-revival from Joe Root and Craig Kieswetter didn't last long. They had put up 37 for the fifth wicket before Kieswetter (18) gifted his wicket, jabbing R Ashwin's harmless delivery straight to Suresh Raina at midwicket.

From there on, wickets were rather easy to pick for India. Root, having made a gritty 36, found his stumps disturbed by Jadeja and India ran through the tail as England were bowled out for 158.

Earlier, India looked to have frittered away the advantage of batting first on a pitch expected to slow down as the game progressed. Gautam Gambhir and Ajinkya Rahane were bowled in consecutive overs - within the first five - before Yuvraj Singh was also dismissed for 32, leaving India three down at 71.

Raina came on and put up a 48-run stand with Virat Kohli for the fourth wicket to steady the Indian ship. However, the stand was broken when Kohli, having scored 37, attempted a needless shot and was caught at sweeper cover.

Raina carried on with Dhoni and the two added 55 runs for the fifth wicket. Dhoni took his time to settle down and even survived a caught behind appeal off Chris Woakes when on six, while Raina was his usual industrious self, though India couldn't completely take advantage of the batting Power Play and lost Raina in the last over of the five-over block.

However, Jadeja turned things around dramatically. Between him and Dhoni, there were whips, cuts and helicopter shots as boundaries came in almost every over and both players completed well-deserved half-centuries.

Dhoni was dismissed in the final over having scored 72 off just 66 balls, his assault including seven fours and two sixes. Jadeja, launching a six off the final ball of the innings, finished unbeaten on 61 off just 37 balls with eight boundaries and two sixes.

In the end, the total of 285 for six the two made possible was way more than enough for England.