Wriddhiman Saha snared a superb diving catch to his right off Ishant Sharma to out do Rohit Sharma's effort earlier on Day One of the day-night Test at Eden Gardens. 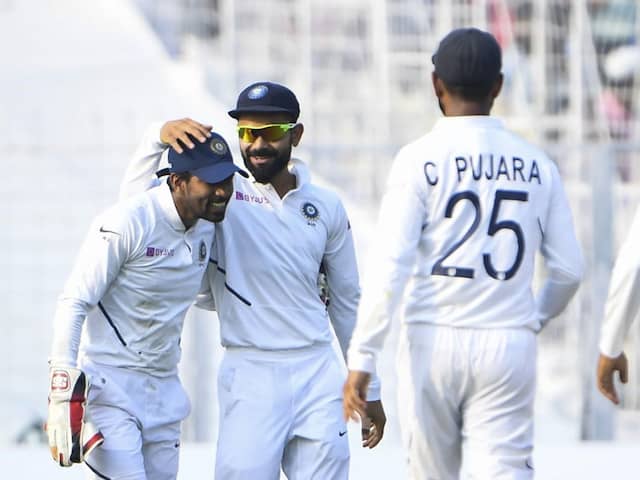 Rohit Sharma took a stunning one-handed catch early on Day One to set the tone for the iconic day-night Test between India and Bangladesh in Kolkata on Friday. Just a while later, Wriddhiman Saha pulled off a low catch to remove Mahmudullah. Just when the fans thought Rohit Sharma has claimed the catch of the match, the wicketkeeper raised the bar. In the 20th over of the match bowled by Ishant Sharma, the ball found the edge but Saha sensed that it will not carry to skipper Virat Kohli at first slip. That is when Saha decided to take matters into his own hands. Saha made the move, dived to his right and the ball stuck right in the webbing between the thumb and forefinger.

Other than taking this stunner, Saha also completed 100 dismissals in the longest format of the game. He is now only the fifth Indian to reach the mark in Test cricket.

The list is led by former India captain MS Dhoni, who has 294 dismissals to his name from 166 innings. Syed Kirmani is second with 198 dismissals from 151 innings. Kiran More (130) and Nayan Mongia (107) occupy the third and fourth spots respectively.

As far as the match is concerned, Umesh Yadav led an inspired pace attack to leave Bangladesh reeling at 73/6 at lunch on the opening day.

Earlier, Mominul Haque won the toss and elected to bat in front of a sell-out crowd.

India made no changes to the team that won the Indore Test inside three days.

"We would have batted first as well. Decent grass cover on it, but it's a hard pitch," Kohli said at the toss.

"With the pink ball there will be something for the first 15 overs. This is another opportunity for us to come and execute our skills.

"The challenge is to adapt quickly to the ball. It travels fast and it's difficult to control. We are fulfilling a responsibility of debuting with the pink ball."

Rohit Sharma India vs Bangladesh Cricket India vs Bangladesh, 2nd Test
Get the latest Cricket news, check out the India cricket schedule, Cricket live score . Like us on Facebook or follow us on Twitter for more sports updates. You can also download the NDTV Cricket app for Android or iOS.