Rishabh Pant has been getting a lot of flak for his less-than impressive show behind the stumps but BCCI chief Sourav Ganguly came to his defence. 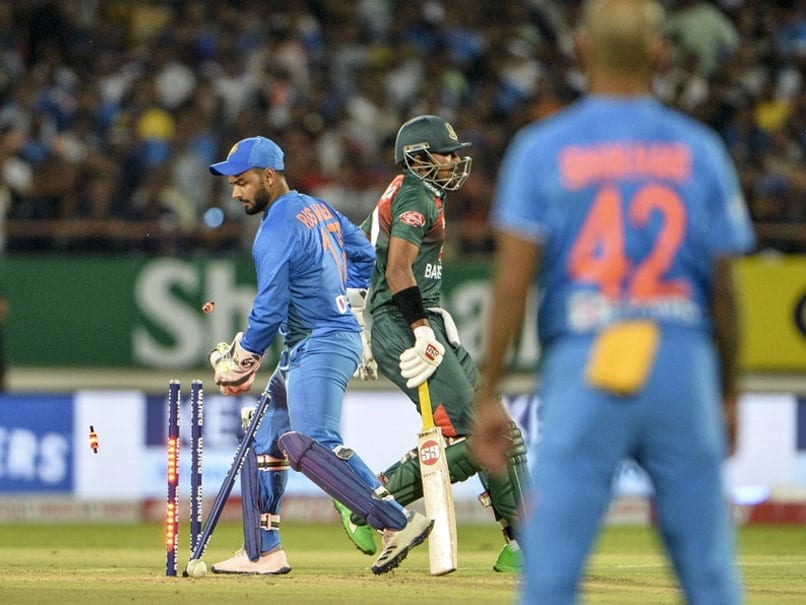 Rishabh Pant, who had a forgettable outing in Delhi, was at the receiving end in Rajkot as well.© AFP

Rishabh Pant, who was mercilessly trolled for his wicketkeeping skills in the first two Twenty20 Internationals (T20I) against Bangladesh, will mature with time, believes BCCI president Sourav Ganguly. The former India captain urged the fans to be patient with Pant as he is still in the learning phase. "He's a superb player. Give Rishabh Pant time, he will be fine," Ganguly said on Friday. Asked if India are missing MS Dhoni behind the stumps, Ganguly said that the team and fans must give time to the 21-year-old Pant. "He will mature slowly, you have to give him time. India played really well last night," Ganguly added.

Pant, who had a forgettable outing in Delhi due to his DRS howlers, was at the receiving end in Rajkot as well.

In the 6th over bowled by Yuzvendra Chahal, Liton Das charged down the track but was totally beaten by the turn. It was an easy stumping chance for Pant, but the delivery was declared a no-ball.

Third umpire Anil Chaudhary gave a lifeline to Liton Das as Pant had grabbed the ball slightly in front of the stumps.

As expected, fans trolled Rishabh Pant and asked for the return of veteran MS Dhoni, who is currently on a sabbatical from cricket.

Pant, however, redeemed himself as he ran Liton Das out in the 8th over for 29 runs.

Then in the 13th over, Pant managed another stumping and it looked very close this time as well.

The giant screen showed Soumya Sarkar was not out but the decision was changed to out just seconds later.

As far as the series is concerned, Rohit Sharma helped India draw level with Bangladesh as the hosts won by 8 wickets.

The 3rd and final T20I will be played in Nagpur on Sunday.

Rishabh Pant Sourav Ganguly Cricket
Get the latest updates on ICC T20 Worldcup 2022, check out the Schedule and Live Score. Like us on Facebook or follow us on Twitter for more sports updates. You can also download the NDTV Cricket app for Android or iOS.