Rishabh Pant convinced Rohit Sharma to go for a DRS as the wicket of Soumya Sarkar was key at the moment. Rohit obliged but it was a wrong call. 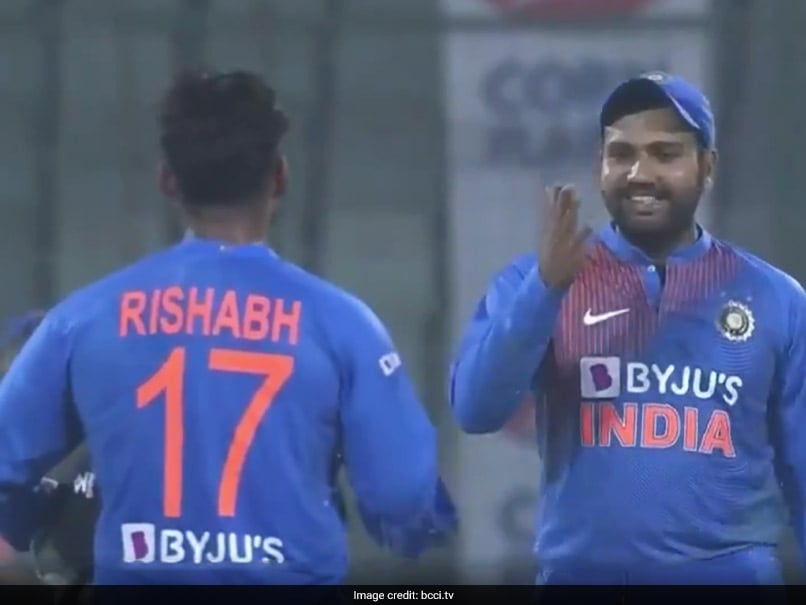 Rohit Sharma smiled at Rishabh Pant after a DRS call did not go India's way.© Twitter

Rishabh Pant had a forgettable day as India lost by 7 wickets against Bangladesh in the first Twenty20 International of the 3-match series in Delhi on Sunday. First, poor running from Rishabh Pant cost Shikhar Dhawan his wicket and then India lost a review at a crucial juncture because the wicket-keeper thought there was an edge. In the 10th over of Bangladesh's innings, Pant convinced Rohit to go for a DRS as the wicket of Soumya Sarkar was key at the moment. Rohit obliged but it was a wrong call. The UltraEdge showed a flat line as ball went past the bat.

India should have taken a review earlier in that over bowled by Yuzvendra Chahal but they did not.

Mushfiqur Rahim, who remained unbeaten on 60, missed and was struck around leg-stump. It was the review that Rohit Sharma should have gone for.

In a moment of immense pressure, Rohit decided to stay calm and just smiled at the young wicket-keeper.

Bangladesh won the toss and opted to bowl as India posted 148/6 in 20 overs. Shikhar Dhawan top-scored for the hosts with 41.

The visitors, riding on Mushfiqur Rahim's unbeaten 60 reached the target with 3 balls to spare to clinch their first-ever T20I win against India.

After the loss, Rohit accepted that the review was a mistake and India were not up to the mark in the field.

"The reviews were a mistake from our side, not to talk about it at least, and the first ball he played on the back foot, we thought it was going down leg, and the next one on the front foot, but we forgot how short he is! We weren't up to the mark on the field, but batting-wise I think we put up a competitive score. Chahal was always welcomed into this format. He's crucial to this team, and he showed how important he is in the middle overs, when the batsmen are set. He completely understands what he needs to execute, and that makes it a little easier for the captain as well," Rohit said.

Rishabh Pant Cricket India vs Bangladesh
Get the latest updates on IPL 2021, check out the IPL 2021 Schedule and Indian Premier League Live Score . Like us on Facebook or follow us on Twitter for more sports updates. You can also download the NDTV Cricket app for Android or iOS.