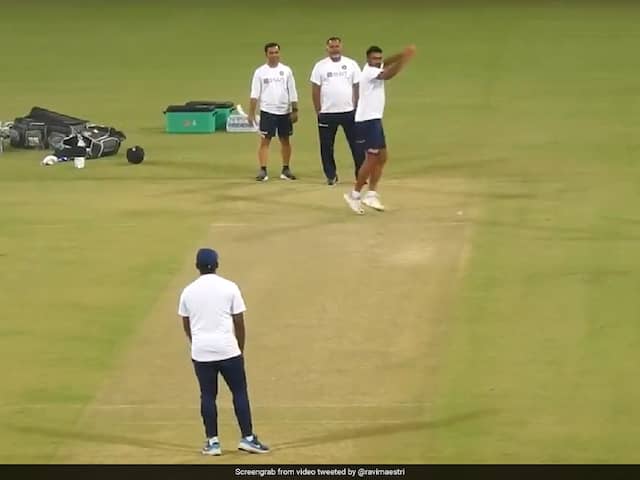 Ravichandran Ashwin, who has plenty of variations up his sleeve, imitated former Sri Lankan captain Sanath Jayasuriya's bowling action with a pink ball ahead of the day-night Test against Bangladesh. Ashwin, a part of the Indian Test squad which stayed back in Indore to prepare for the pink-ball Test, was seen bowling with his left hand during the practice session. Ravichandran Ashwin, who picked up five wickets during the first Test against Bangladesh, will also be a key in the spin department for the day-night Test starting at the Eden Gardens in Kolkata from November 22.

No one: We are running out of variations

Apart from Ashwin, captain Virat Kohli, Cheteshwar Pujara and Mayank Agarwal were also seen preparing for the pink-ball Test, in a video posted by BCCI.

Getting ready for the Pink ball Test be like #TeamIndia #INDvBAN pic.twitter.com/BtwfEwFKwN

Ashwin was well supported by fellow spinner Ravindra Jadeja during the first Test. The spin twins were seen bowling in tandem during the match which India won by an innings and 130 runs.

Ashwin has been the premier spinner for India over the years. He has been largely preferred in home conditions. His achievements include 362 Test wickets, 150 in One-Day Internationals (ODIs) and 52 in the shortest format of the game.

He will next be seen in action during the final Test against Bangladesh. India currently lead the two-Test series 1-0.

India currently top the World Test Championship (WTC) standings with 300 points. The final Test will be chance for India to further consolidate their position. New Zealand are second in the standing with 60 points.