Mayank Agarwal scored his third Test century to put India on top in the ongoing first Test against Bangladesh in Indore. 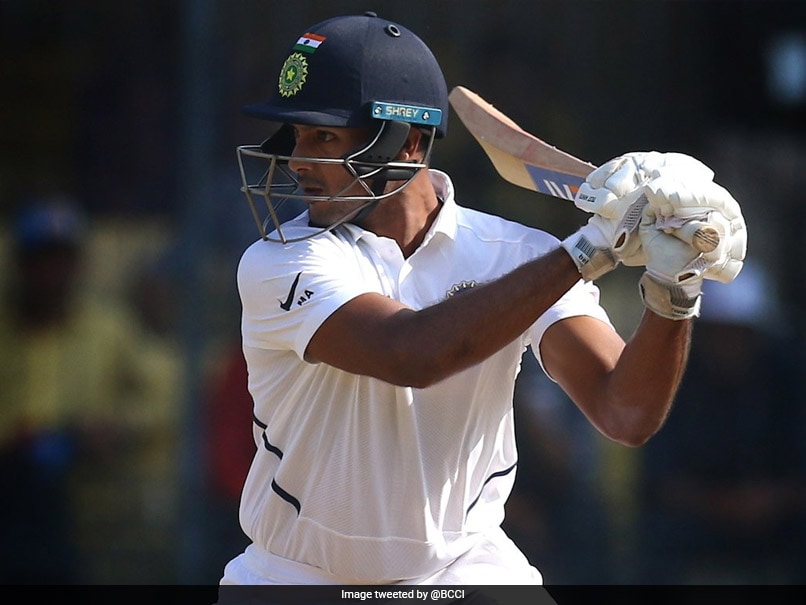 Mayank Agarwal brought up his third Test century on Day 2 to strengthen India's grip on the ongoing Indore Test against Bangladeshon Friday. Mayank Agarwal reached the three-digit mark with the help of 15 boundaries and one maximum. India were in trouble at one stage after losing Cheteshwar Pujara and Virat Kohli in quick succession on Day 2 morning but Agarwal stood tall and kept putting the bad balls away. India vice-captain Ajinkya Rahane joined the opening batsman and steadied the ship for the hosts. The duo helped India go past Bangladesh's first innings total of 150.

At Lunch on Day 2, India were well ahead in the game, leading the visitors by 38 runs with seven wickets in hand.

India resumed their innings on Day 2 from 86 for one. Cheteshwar Pujara scored his 23rd Test half-century but was soon dismissed for 54 by Abu Jayed.

The 26-year-old fast bowler soon gave Bangladesh another huge breakthrough by trapping India captain Virat Kohli in front of the stumps. The on-field umpire gave the decision in favour of Kohli but Bangladesh went for a review and got the reward.

Ajinkya Rahane then came out and played his shots. His positive intent brushed off on Agarwal, who accelerated and attacked the spinners as well.

On Day 1, after winning the toss and opting to bat, Bangladesh failed to cope with India's bowling prowess and were bundled out for just 150 in just over a couple of sessions.

Bangladesh started well with the ball as they sent back Rohit Sharma for six but failed to make any further inroads on Thursday.

Bangladesh Cricket Team Mayank Agarwal Cricket India vs Bangladesh India vs Bangladesh, 1st Test
Get the latest updates on IPL 2021, check out the IPL 2021 Schedule and Indian Premier League Live Score . Like us on Facebook or follow us on Twitter for more sports updates. You can also download the NDTV Cricket app for Android or iOS.