Photos of Ravi Shastri, Rishabh Pant and Shikhar Dhawan among other Indian players meeting the Suryakiran Aerobatic Team were tweeted by BCCI. 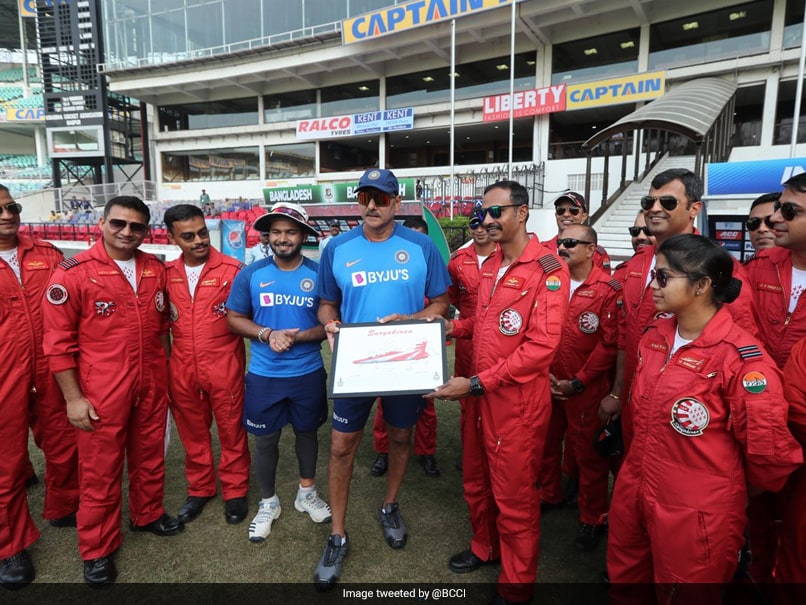 The Indian cricket team met the Suryakiran Aerobatic Team of the Indian Air Force on Saturday. The Board of Control for Cricket in India posted pictures of the members of the Indian team shaking hands with the pilots in Nagpur at the VCA stadium. The pictures showed coach Ravi Shastri, opener Shikhar Dhawan and wicketkeeper Rishabh Pant shaking hands with the pilots and interacting with them. Photographs of Pant and Shastri with the pilots were also posted along with those of bowling coach Bharat Arun, Shardul Thakur, Shubman Gill and Manish Pandey.

Such a lovely afternoon here in Nagpur as #TeamIndia caught up with the Suryakiran Aerobatic Team of the Indian Air Force @Suryakiran_IAF #suryakiran pic.twitter.com/kOXpVT8FvL

India are set to take on Bangladesh in the decisive third T20I in Nagpur on Sunday. Bangladesh won the first match, in Delhi, by seven wickets -- their first ever win over India in the shortest format of the game. However, India bounced back by hammering Bangladesh by eight wickets in the second match and thus levelled the series.

Rohit Sharma was the star of the show in the second T20I in Rajkot, as he propelled India to a comfortable win with a 43-ball 85. He also became the first Indian men's team player to make 100 T20I appearances.

Bangladesh coach Russell Domingo has pinpointed India's "inexperienced" bowling attack as the area that they would like to target going into the series decider. India are without pace spearhead Jasprit Bumrah, who is out with injury, and Bhuvneshwar Kumar. India have so far opted to go for Khaleel Ahmed and Deepak Chahar as their pacers, with Yuzvendra Chahal and Washington Sundar as their frontline spinners.