India vs Bangladesh: Guess Who Gave Rohit Sharma His 100th T20I Cap Ahead Of Bangladesh Win?

Rohit Sharma is now second on the overall list of most capped T20I players, only behind Pakistan's Shoaib Malik. 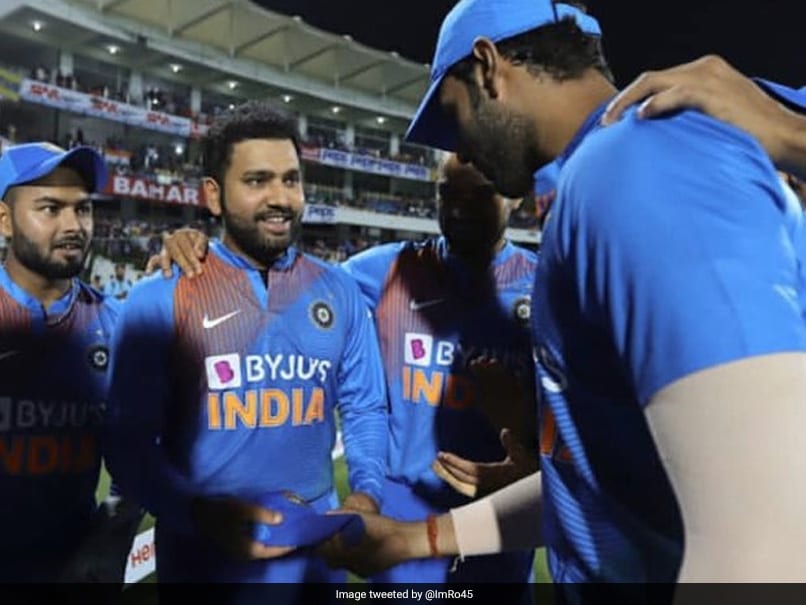 Rohit Sharma receives his 100th T20I cap before the match against Bangladesh.© Twitter

Rohit Sharma played his 100th T20 International on Thursday, when he powered India to an eight-wicket win over Bangladesh in Rajkot. India's stand-in captain took to Twitter to share a photo of him receiving his 100th cap ahead of the match. In the photo, Shivam Dube, who had played only one T20I for India prior to Tursday's match, is seen handing Rohit the cap. "Be it whichever format, I'm indebted to have this opportunity to do something for the country. I have cherished all these times and will do so forever," Rohit wrote on Twitter along with the photo.

On the special occasion, Rohit Sharma went on a six-hitting blitzkrieg, as he scored 85 runs off just 43 balls, helping India reach their target of 154 with 26 deliveries to spare.

"I never thought I will play so many games, grateful for opportunities I've got in the past. It has been a long journey since I made a debut," Rohit had said before the match in Rajkot.

Rohit Sharma has scored 2,537 T20I runs so far that include four centuries and 18 fifties.

On Thursday, Rohit joined Harmanpreet Kaur, who has also played 100 T20Is in women's cricket, to become the second Indian to achieve the feat. He is the most capped men's team player in T20Is for India.

Rohit Sharma, who made his T20I debut against England during the World T20 in 2007, is now second on the overall list of most capped T20I players, only behind Pakistan's Shoaib Malik.