Michael Vaughan congratulated BCCI president Sourav Ganguly for beginning the pink-ball Test era in India and said he hopes the side to play a couple of matches in Australia next winter. 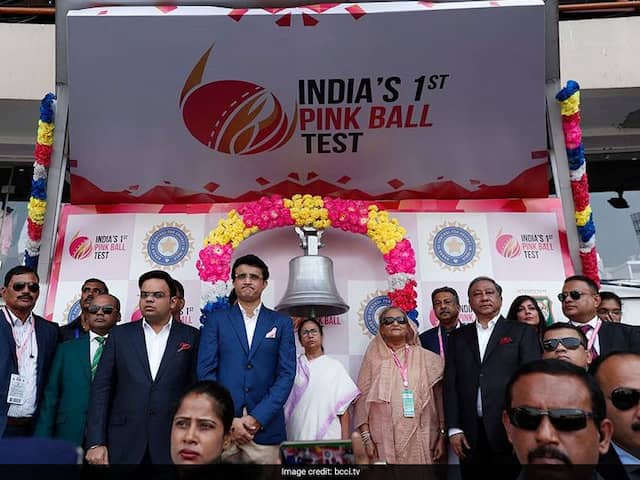 Former England captain Michael Vaughan congratulated BCCI president Sourav Ganguly for beginning the pink-ball Test era in India, adding he wants to see the side play a couple of matches in Australia next winter. "Well done Sourav .. look forward to a couple in Aussie next winter," Michael Vaughan tweeted. Sourav Ganguly had proposed the Eden Gardens Test to be a pink-ball match to Bangladesh Cricket Board (BCB) soon after he took office as the BCCI president. BCB accepted the proposal made by Sourav Ganguly and as a result both India and Bangladesh are playing their maiden pink-ball Test.

Well done Sourav .. look forward to a couple in Aussie next winter https://t.co/MgJxCanKgD

Kolkata was decked up in "pink" in anticipation of the historic moment. Ganguly had shared a video of his hometown ahead of the match which saw many high rises been lit in pink colour. In a video posted on Twitter, Ganguly wrote: "Well BCCI and Cricket Association of Bengal (CAB)... look forward to 5 days @JayShah."

The occasion was graced by West Bengal Chief Minister Mamata Banerjee and Bangladesh Prime Minister Sheikh Hasina, who rang the bell ahead of the match. Cricket legend Sachin Tendulkar was also present to witness the historic occasion.

Bangladesh opted to bat in the pink-ball Test against India. The visitors were left reeling at 73/6 at lunch on Day 1 with Umesh Yadav picking up three wickets for India.

Bangladesh Cricket Team India vs Bangladesh Michael Vaughan Sourav Ganguly Cricket
Get the latest Cricket news, check out the India cricket schedule, Cricket live score . Like us on Facebook or follow us on Twitter for more sports updates. You can also download the NDTV Cricket app for Android or iOS.