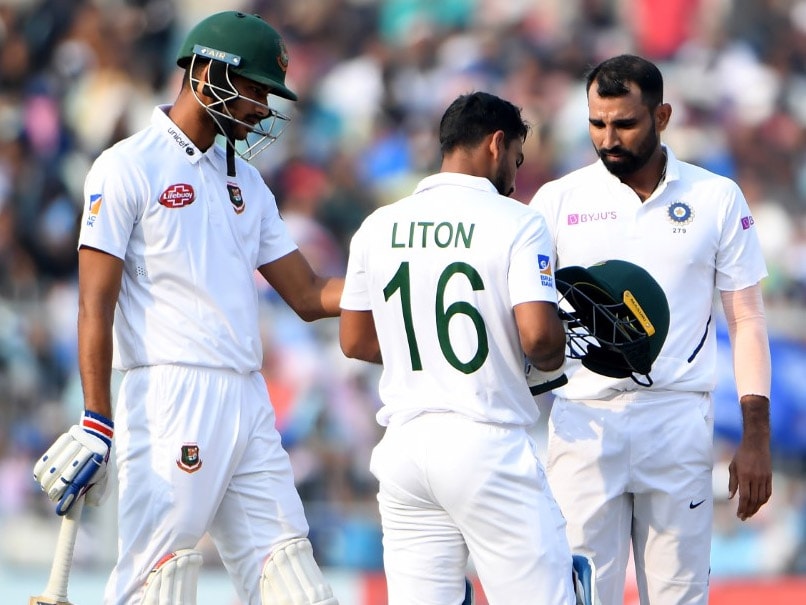 Liton Das was hit by Mohammed Shami on Day 1 of the pink-ball Test.© AFP

Liton Das and Nayeem Hasan, the two concussed Bangladesh players, caught the eye of Bangladesh Prime Minister Sheikh Hasina as she personally spoke to the players to know about their condition. Mehidy Hasan and Taijul Islam were named concussion substitutesfor Liton and Nayeem respectively after both batsmen picked up knocks on the helmet by Mohammed Shami deliveries, during their first innings against India on Day 1 of the second Test at the Eden Gardens on Friday. Liton went for a CT scan at a city hospital while Nayeem also had his MRI done.

Hasina, who was present at the Eden for the historic Test and rang the Eden bell along with West Bengal Chief Minister Mamata Banerjee and BCCI president Sourav Ganguly, called Liton and Nayeem to her lower tier hospitality box to ask about their condition, sources told IANS.

Liton was looking good on 15 when a quick Shami delivery thudded on to his helmet. He took off his helmet immediately and took a look as Shami walked up to apologise.

The physiotherapist rushed in as per the latest concussion protocols. Liton continued for some time but after umpires Joel Wilson and Marais Erasmus had a look just before tea, he was seen walking off and later retired hurt.

Liton scored a brisk 24 to show some fight after all Bangladesh batsmen succumbed to the might of the Indian pace battery.

Nayeem, playing his first match of the two-match series, scored 19 and was hit on the helmet just after tea.

Liton Das Nayeem Hasan Cricket
Get the latest updates on ICC Women's Cricket World Cup 2022 and IPL 2022, check out the Schedule , Live Score and IPL Points Table. Like us on Facebook or follow us on Twitter for more sports updates. You can also download the NDTV Cricket app for Android or iOS.