Glenn Maxwell's run out, however, was contentious, as Dinesh Karthik had accidentally knocked one stump off before he got the ball 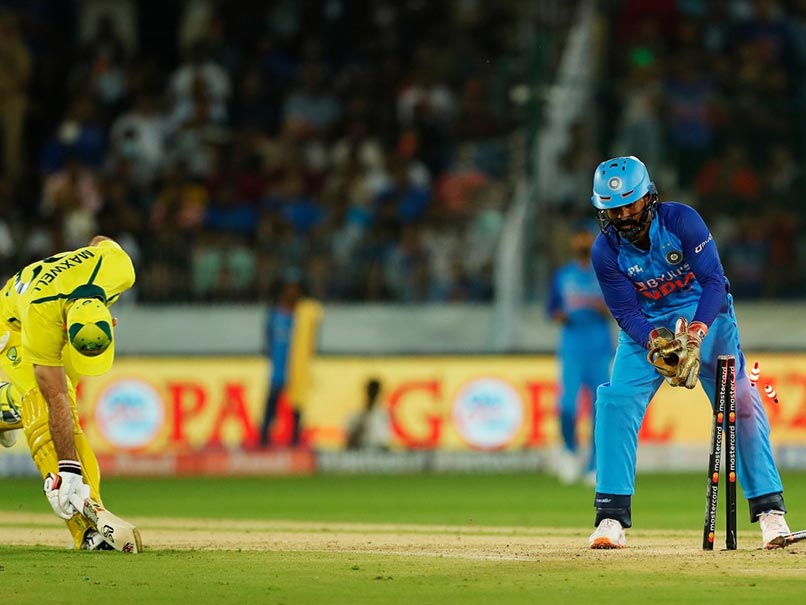 Dinesh Karthik had accidentally knocked one stump off before he got the ball.© BCCI

After Cameron Green gave Australia a blistering start in the third T20I in Hyderabad, India came back strong. After Bhuvneshwar Kumar sent Green packing for a 21-ball 52, Glenn Maxwell and Steve Smith fell in quick succession as well. Maxwell's run out, however, was contentious, as Dinesh Karthik had accidentally knocked one stump off before he got the ball. Thankfully for him, though, the other bail was still lodged on the stumps and when the ball hit and removed it, the third umpire deemed it to be out.

Maxwell was not too happy about it, but the Indian camp was in a cheery mood. A relieved Rohit Sharma even went up to Karthik and gave him a kiss on his helmet.

ICYMI - Rocket throw from the deep by @akshar2026

And then, a bit of luck on #TeamIndia's side...

Watch how Maxwell got out.

It was some lightning-fast work from Axar Patel in the field that led to Maxwell's run out, and the dismissal saw Australia three wickets down.

After India put Australia in to bat, Green got the visitors off to a flyer in the series decider, taking the bowlers to the cleaners, even as Axar removed Aaron Finch. He reached his half-century in just 19 balls, but fell two deliveries later.

It was the tall all-rounder's second half-century of the series, having smashed 61 off 30 deliveries in the first T20I, as Australia chased down 209 to take the lead in the three-match contest.

India however, went on to win the second T20I to level the series before the match in Hyderabad.

Glenn Maxwell India vs Australia, 2022 Cricket
Get the latest updates on Fifa Worldcup 2022 and check out  Fifa World Cup Schedule, Stats and Live Cricket Score. Like us on Facebook or follow us on Twitter for more sports updates. You can also download the NDTV Cricket app for Android or iOS.