Ravi Shastri was full of praise for his bowlers, saying the rival batsmen can't take much freedom against them in the death overs. 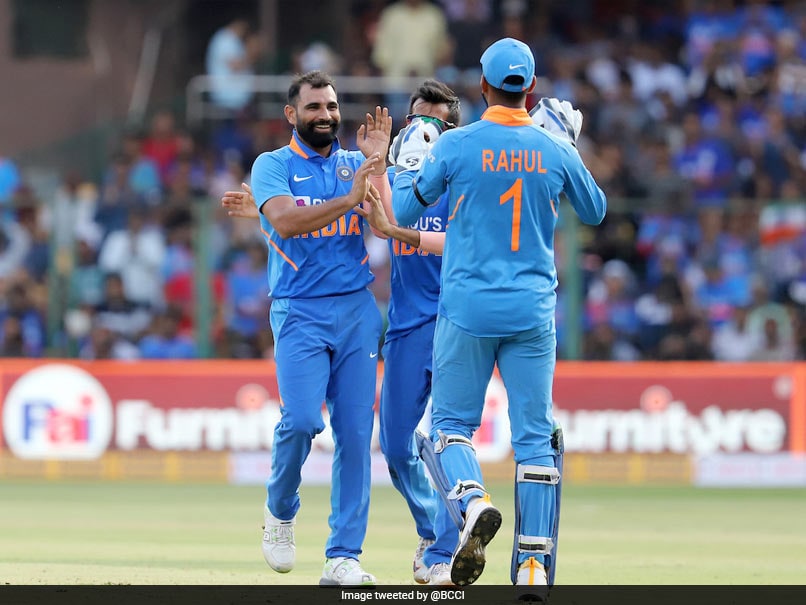 Mohammed Shami picked up four wickets in the third ODI against Australia.© Twitter

"Nobody can say we played an inferior Australia side," said head coach Ravi Shastri, taking an obvious dig at critics who did not rate highly India's Test series win Down Under last year. Shastri's comments came after India wrapped the home ODI seriesagainst full-strength Australia. Skipper Virat Kohli had led India to its first ever Test series win on Australia soil but it had come in the absence of their key batsmen David Warner and Steve Smith, who were serving bans after being indicted in a ball-tampering scandal.

Critics said the win came when Smith and Warner were not there to challenge India.

BCCI President Sourav Ganguly had also said the even Kohli knows that the away Test series win in 2019 was not against a full-strength Australia.

"This team, the boys showed great character. Nobody can say we played an inferior Australia side. They got a thrashing in Mumbai, and then to win two games, with all the travel, and with Australia winning all three tosses," Shastri said after India's seven-wicket win in the decisive third match.

But both Smith and Warmer were in the Australian line-up for this ODI series, which India claimed 2-1 after losing the series-opener in Mumbai.

Eulogising the players in his side, Shastri said each one of them is good enough to be in the playing XI.

"Virat and Rohit batted well, and Shreyas will get a lot of confidence from this innings."

Shastri was full of praise for his bowlers, saying the rival batsmen can't take much freedom against them in the death overs.

"If sides are looking to take us apart in the last 10 overs, then we have a lot of variety. The game might be 130 years old, but that [the yorker] is still the best ball in the world," Shastri said referring to the block-hole delivery which the Indians used very effectively and consistently against the Australians in this series.

"The exposure they (youngsters) get against this Australian outfit will stand them in good stead. Their mindset will be entirely different. Young Saini is quick, and if he gets it right, he'll tickle a few. Really proud of the guys - I thought they were magnificent," he signed off.