Michael Clarke posted a video on his Instagram account of him learning the nuances of driving an auto-rickshaw and then is even seen taking it for a spin alone. 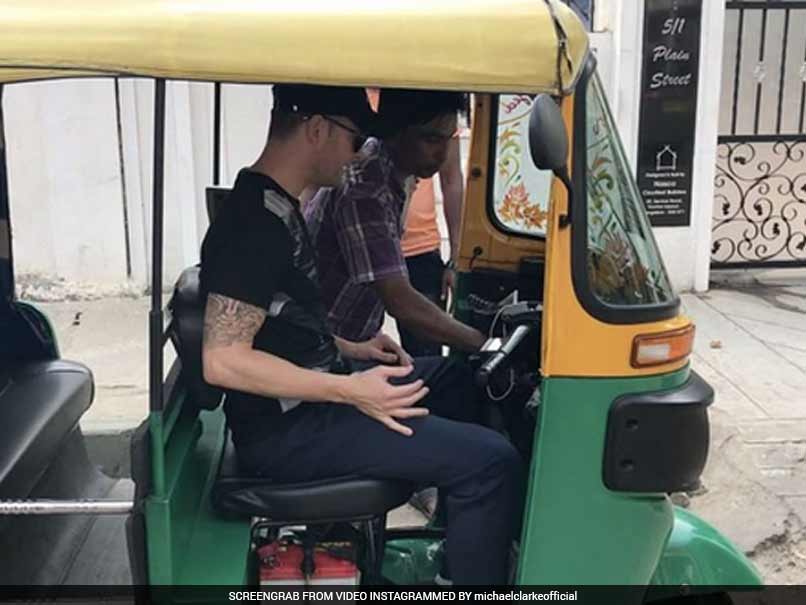 Australians over the years have seem to taken a liking to India. Steve Waugh has become household name in Kolkata through his social work while Matthew Hayden, who spent a few years playing with the Chennai Super Kings, has been seen rocking the surf board at Mamallapuram on the Coromandel Coast. Michael Clarke is in India on commentary duties for the India vs Australia Test series but that hasn't stopped him from trying his hand at other things. The former Australia skipper put up a video of him driving an auto-rickshaw or a 'tuk tuk', as most foreigners would call it.

After the shocking turn of events in Pune where India's 19-match unbeaten streak came to an end following a 333-run loss to Australia in the opening Test, the bandwagon is now rolled over to Bengaluru for the second Test, starting on March 4.

With the first Test finishing inside three days, Clarke seems to have some time to kill in Bengaluru.

He posted a video on his Instagram account of him learning the nuances of driving an auto-rickshaw and then is even seen taking it for a spin alone.

Clarke obviously has some fond memories of Bengaluru, having made his international Test debut at the M Chinnaswamy Stadium in October 2004. The right-hand batsman made an instant impact smashing 151 on his debut in the first innings as Australia won the Test by 217 runs.

On a separate note, Clarke also posted a picture with Indian skipper Virat Kohli with a caption that read, "Always great to catch up with @virat.kohli. Good to see you buddy!".

Always great to catch up with @virat.kohli. Good to see you buddy!

Kohli will be gunning to avenge India's loss in Pune. The 28-year-old, who is the captain of Royal Challengers Bangalore in the Indian Premier League (IPL), will also be looking forward to playing in Bengaluru.

Comments
Topics mentioned in this article
India Cricket Team Australia Cricket Team Michael Clarke Virat Kohli M.Chinnaswamy Stadium, Bengaluru Australia vs India 2011-12 India vs Australia 2017 Cricket
Get the latest updates on India vs England Series, India vs England , live score and IPL 2021 Auction . Like us on Facebook or follow us on Twitter for more sports updates. You can also download the NDTV Cricket app for Android or iOS.