An Australian newspaper has accused Virat Kohli of striking an Australian official with an energy drink bottle and also alleged that Anil Kumble stormed into the match officials' box for clarification over Kohli's dismissal in India's second innings. 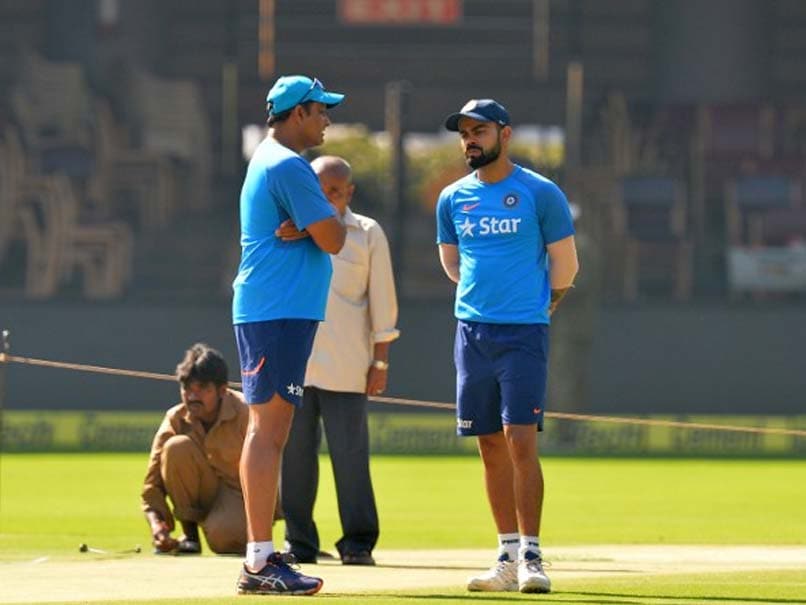 Many thought with the Board of Control for Cricket in India (BCCI) withdrawing their complaint against Australia captain Steve Smith and batsman Peter Handscomb, focus will return to on-field matters. However, there seems to be no end to the bad blood brewing between the two teams. In the latest controversy, an Australian newspaper has made stunning allegations against India captain Virat Kohli and coach Anil Kumble, both of whom have been accused indecent behaviour during the second Test in Bengaluru.

The Daily Telegraph, in a report, has accused Kohli of striking an Australian official with an energy drink (Gatorade) bottle.

The paper also alleged that Kumble stormed into the match officials' box for clarification over Kohli's dismissal in India's second innings.

The newspaper took the opportunity to dub Kumble as the key instigator in the Monkeygate fiasco, involving Harbhajan Singh and Andrew Symonds.

"Kohli might be the aggressor in the brazen campaign India is running against Australia's integrity - even striking an Australian official with an orange Gatorade bottle - but coach Kumble, one of the main instigators of the Monkeygate fiasco, would appear to have reclaimed his role as the puppeteer behind the scenes," said the report.

"It's understood Kumble has also made his fury known about the actions of match referee Chris Broad during the Test, complaints which are now to be passed onto the ICC by the BCCI."

In the report, Kohli was also accused of swearing "in the direction" of the Australian box and making a throat-slitting gesture at Handscomb.

The newspaper likened Kohli to the "villainous" former Sri Lanka captain Arjuna Ranatunga and blamed the Indian skipper for killing the spirit of the game.

"Kohli was also seen swearing in the direction of the Australian box as he left the field and using a throat-slitting gesture to send-off Peter Handscomb late in the Test. The spirit of the game notion has been pronounced dead in the game many times before, but Kohli - a law unto himself - would appear to have killed it off once again with his behaviour some of the worst by an international captain since villainous Sri Lankan leader Arjuna Ranatunga," the report said.

"By not taking action against Kohli for his behaviour on and off the field in Bangalore, the ICC has virtually given a green light for complete anarchy to break out in Test cricket."

Comments
Topics mentioned in this article
India Cricket Team Australia Cricket Team Steven Smith Peter Handscomb Virat Kohli Anil Kumble India vs Australia 2017 Cricket
Get the latest updates on ICC T20 Worldcup 2022, check out the Schedule and Live Score. Like us on Facebook or follow us on Twitter for more sports updates. You can also download the NDTV Cricket app for Android or iOS.