We have plans for Jadeja and Ashwin, says Adam Voges

The first Twenty20 game between the two sides is scheduled on October 10 at Rajkot before the commencement of the seven-ODI series at Pune on October 13. 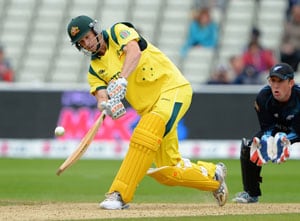 Aware of the stiff challenge awaiting them in the upcoming battle against World Cup champions India, Australia's Adam Voges on Tuesday said that the key is to make a good start in the seven-match rubber, which can provide a chance to the visitors to grab the number one ODI ranking.

"Look, there's a big incentive for us in this tournament. Obviously, India are number one at the moment but if we can have a good win in this series, we've got an opportunity to overtake them, so there's no bigger incentive than that," said the 34-year-old Western Australia middle order batsman. (Also see: Pics - Aussies sweat it out in training session)

"Obviously, we have to play extremely well for that, like last time I was here. If we can play some good cricket, start well, I think that will be important," remarked Voges after Australia concluded their third and last day's practice session at the Cricket Club of India.

The first Twenty20 game between the two sides is scheduled on October 10 at Rajkot before the commencement of the seven-ODI series at Pune on October 13.

Voges, who said he has fully recovered from his tired back and hamstring that forced him to return home midway through the Champions T20 League when playing for Perth Scorchers, did not agree that Australia's batting looked a bit fragile.

"I think our one-day batting has been okay. We played pretty well against England in their conditions. Obviously the Champions Trophy (lifted by India) didn't go as we would have liked but I thought the way we bounced back against England in England was pretty good.

"We'll take a lot of confidence out of that as a batting group and we've got some continuity I guess with our batters. We know our role and like I said, a good start to our batting group will be crucial," he said.

Voges said India's spin bowling was challenging as a whole in their home conditions, which, he felt, his team's players are pretty well used to these days.

"We need to have our plans against Jadeja, Ashwin and all the Indian bowlers. It's going to be tough work against spinners in their conditions. You don't become no.1 without being a very good all-round team. We'll be well prepared," Voges, who has played 25 ODIs and seven T20s, said.

"As long as we have got some clear game plans about how we're going to tackle them, its about executing them. It's going to be a big challenge but I am certainly looking forward to it.

Asked about the controversial all rounder Shane Watson acting as a mentor to his teammates, Voges said the younger members would benefit listening to him and wicketkeeper-batsman Brad Haddin due to their vast experience.

"Shane is a senior player along with Brad Haddin and these guys bring a wealth of experience particularly here in India. Shane has played a lot of cricket here and any tips that he can give to any of our guys, I am sure we all will be listening," said Voges.

He said the team was a close-knit group with a few members, including himself, having being a part of the 2009 team that won 4-2 in India.

"I think we're a pretty close-knit team now. we've got some guys who played in the series in 2009, I think we've got four or five guys from that trip who had success back then. We know how to win here and that's something that would be important."

Asked about forcing his way into the Test team, Voges said right now he was not looking beyond Thursday's T20 game.

"Look, every time I play for Australia is a huge opportunity for me. I am not looking any further than Thursday night. And hopefully I can have a big series. But as I said earlier, starting well would be the key."

Comments
Topics mentioned in this article
Cricket India Cricket Team Australia Cricket Team Adam Voges India vs Australia 2013-14
Get the latest updates on ICC T20 Worldcup 2022 and CWG 2022 check out the Schedule, Live Score and Medals Tally. Like us on Facebook or follow us on Twitter for more sports updates. You can also download the NDTV Cricket app for Android or iOS.