Virat Kohli on Saturday became the number one batsman in One-day cricket after a superb batting show against Australia in the just-concluded series, in which he scored 344 runs.

This gave the 24-year-old a series aggregate of 344 runs at an average of 114.66, and a reward of 38 ratings points which helped him to jump three places to top of the ICC ranking table for ODI batsmen.

He has achieved the number-one spot for the first time in his career, just a few days before his 25th birthday.

Kohli has now become the third India batsman to hold the number-one batting rank in ODI cricket, after Sachin Tendulkar and MS Dhoni.

Tendulkar first claimed the number one position when he took over from Brian Lara in February 1996. He was last number one in March 2008.

Dhoni first reached number one when he took over from Ricky Ponting in April 2006. He was last ranked number one in July 2010.

Kohli now leads South Africa's Hashim Amla by 13 ratings points. Amla had been holding the coveted number-one position since November 2010. Kohli is not the only batsman who has gained in the latest rankings, which were released today.

Australian skipper George Bailey jumped six places to claim the number-three position for the first time in his career. Bailey scored 478 runs with a century and three half-centuries to earn 121 ratings points, which, in turn, has put him on a career-best 835 ratings points alongside a career-best ranking to-date.

India's Shikhar Dhawan has broken into the top 20 for the first time in his career after he jumped 12 places to claim 11th position in the batting chart. The left-handed opener scored 284 runs at an average of 56.8. Dhawan's opening partner Rohit Sharma has also achieved a career-best ranking of 15th after finishing as the leading run-getter in the series, with 491 runs at an average of 122.75, including 209 in the final ODI on Saturday. Rohit's results have earned him 102 ratings points and a leap of 25 places.

Rohit is now India's fifth batsman to feature inside the top 20, with the others being Kohli (first), MS Dhoni (sixth), Dhawan (11th) and Suresh Raina (19th).

In the ICC Player Rankings for ODI bowlers, Pakistan's Saeed Ajmal has regained the number-one position, while Jadeja has slipped two places to finish in third spot.

Saeed had trailed Jadeja by 10 ratings points before the start of the series and, while the India spinner took eight wickets in the series against Australia, the Pakistan bowler has claimed six wickets in two ODIs against South Africa so far.

The biggest movers in what has been a difficult series for the bowlers are Vinay Kumar, Faulker and Mohammad Shami.

Kumar's seven wickets in the series have given him a lift of nine places into 61st position, while Faulker and Shami took seven wickets apiece and are now in 62 and 64th spots, respectively.

In the Rankings for ODI all-rounders, Watson and Jadeja have slipped one place each. The list is headed by Mohammad Hafeez of Pakistan.

The 3-2 series win for India means that it continues to sit on top of ODI Team Rankings with Australia in second position, nine ratings points behind. 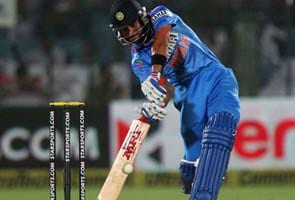