Ian Chappell says that the Australians should not feel relieved at the impending retirement of Sachin Tendulkar as they could be meted out the same treatment in future from Virat Kohli, who hit two stupendous centuries against the Aussies in the just-concluded ODI series. 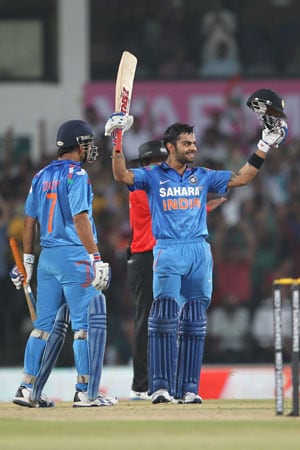 Former Australian captain Ian Chappell on Sunday joined the bandwagon of experts who feel that Virat Kohli can fill in the big shoes of retiring Sachin Tendulkar, describing the youngster as the "prince" of Indian cricket.

Chappell says that the Australians should not feel relieved at the impending retirement of Tendulkar as they could be meted out the same treatment in future from Kohli, who hit two stupendous centuries against the Aussies in the just-concluded ODI series.

"With Tendulkar on the verge of retirement, Australian bowlers, past and present, must be sighing with relief that the torment is nearly over. Those expressions of relief are a bit premature. Virat Kohli's two recent centuries, plundered in winning Indian causes, were eerily similar and a stark reminder of Tendulkar's feat against Australia in Sharjah in 1997-98," Chappell wrote in 'ESPNcricinfo'.

"He (Kohli) is now set to take over not only Tendulkar's coveted No. 4 spot but also his mantle as the Indian player opponents most want out. Long remember the king for he's (nearly) gone; hail the prince, because he's still around to torment bowlers," he said.

Comparing Tendulkar's two Sharjah centuries with those of Kohli's two recent tons, Chappell said, "Tendulkar's first hundred in Sharjah was scored in a game India had to perform exceptionally well to advance to the final, while the second came in the final to pull off an extraordinary win - they were the two best ODI innings I saw Tendulkar play.

"He tore into an Australian attack that included Shane Warne, and in both innings Tendulkar scored at better than a run a ball in an era when that wasn't an everyday occurrence.

"Kohli went one better than Tendulkar. Both his imperious centuries ended in unlikely Indian victories. That's not to say Kohli is a better player than Tendulkar, but he has acquired the knack of being at crease when the winning runs are hit in extraordinarily difficult chases."

Chappell said just like Tendulkar's stardom was confirmed with his two centuries in Australia in 1991-92 tour, Kohli also proved his special liking for Australian bowling attack in India's 2011-2012 tour.

"There was his (Tendulkar's) hundred at the SCG in 1991-92, which set in motion a love affair with the ground. That was bettered two Tests later by a remarkable century on the bouncy WACA pitch. Tendulkar was already a star, but this remarkable performance ensured the world would understand that this was a batsman out of the box.

"To continue the Tendulkar-Kohli similarities, it was an innings in Perth by the younger batsman that enhanced his self-belief at Test level. Kohli didn't make a hundred at the WACA, but his confidence-building 75 in second innings was a shining jewel in the rubble of India's performance; this he followed up with a century in his next Test innings," Chappell said.

"Like so many overseas batsmen before him, a century in Australia was the achievement that convinced Kohli he had arrived as a Test player. Since then he hasn't looked back."

Despite those similarities, Chappell felt Tendulkar and Kohli were different personalities, especially in their temperament.

"Kohli started his career at a much more advanced age than the child prodigy and they are totally dissimilar in temperament," said the former Australian captain.

"Tendulkar, calm and calculating, is reserved more by circumstance than nature. Kohli, on the other hand, is an extrovert who wears his heart on his sleeve, and you wonder if that won't hurt him when he endures a rough trot. The Indian fan's obsession with 'star culture' can be a two-edged sword."

Chappell said Kohli may have to reign in his emotions if he wants to become India captain.

"For the moment, Kohli's passion fuels his play, and in his more flamboyant innings it appears that there's nothing he can't achieve. As a likely future Indian captain, he may have to rein in outwardly emotional displays," he said.

"In the meantime, his batting is there to be savoured and enjoyed -- that is, if you are not an Australian bowler."