Australia skipper George Bailey says Rohit Sharma, who became the third cricketer after Sachin Tendulkar and Virender Sehwag to score a double century in ODIs, is flourishing at the top of the order. 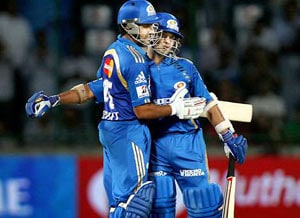 Impressed with his breathtaking display of batting, Australia skipper George Bailey says Rohit Sharma is certainly the one who is in the mix for the spot that will open up after Sachin Tendulkar's retirement from international cricket later this month.

Rohit struck a match-winning double century as India registered a 57-run victory in the series-deciding final ODI against Australia to clinch the seven-match series 3-2.

"It was an extraordinary innings. He has had a wonderful series. He is obviously flourishing at the top of the order. He would certainly be one who is in the mix for that spot that will open up after the great man (Sachin Tendulkar) departs in a couple of Tests," he told reporters at post-match press conference here.

Bailey also lauded Rohit for pacing up his innings wonderfully after starting on a slow note. (Rohit's Diwali dhamaka in pictures)

"It was extraordinary. I think the record was smashed for most sixes in a game. I thought Rohit batted beautifully. He summed it up. He wasn't actually that quick early on. I looked at it when he brought his 100 up and he was probably only run a ball. He just got a bit busier after that," he said.

Rohit had blasted his way into the record books with a breathtaking 209 that included a record 16 sixes. He also became only third batsman in the history of ODI cricket after Sachin Tendulkar (200 no) and Virender Sehwag (219) to reach the coveted double ton. This was also the highest individual ODI score by any batsman against Australia in ODIs.

Asked whether 400-run chase with the new rules of five fielders inside the circle and two new balls good for the game, Bailey said it would be a different ball game in livelier conditions in Australia and South Africa.

"You won't get wickets like this in Australia and South Africa. It does depend a little bit on conditions and then when you get those conditions in Australia, may be the two new balls play a part and the team might be 3-30, and you have got to find a way to get to 250. It is different everywhere. It is just a matter of striking the balance. I don't mind the odd games like this," he explained. (Also read: New rule of five fielders inside the circle helped me, says Rohit)

Bailey admitted that the Aussies certainly missed the services of pacer Mitchell Johnson.

He indicated that Australia lost the match because their top order batsmen failed to score and get partnerships goings.

"You need your top-order to score a few to get you on track early. And if you can get partnerships...what we have seen on these grounds, if you have got wickets in hand you can score anything," he said. (Match highlights)

Praising James Faulkner, Bailey said the Tasmanian has got a wonderful future ahead and 'teams will fear him because of the energy and competitiveness he brings into the game'.

"Teams will certainly fear him. It is just that energy he brings is wonderful. The competitiveness he brings is something you love playing with. He has got a pretty bright future," he said. (Dean Jones thrilled by batting, saddened by bowling)

Talking about Faulkner's bowling, the stand-in-skipper said, "He bowls in powerplays, at the start and the death. He loves that responsibility. I think we have just seen him come into his own with a bit of confidence."

On India opener Shikhar Dhawan getting engaged in a war-of-words with Shane Watson, Bailey said, "Yeah he is pretty animated isn't he? He is obviously passionate about how he goes about it. I think there is a bit of that on both sides. There are guys who are very passionate. There is a lot riding on the line. But there is a fine line there I guess.

Asked whether Watson would miss Ashes series due to injury, Bailey said, "The team won't know anything until Watson gets home and gets a proper scan looked at."

Bailey said his run out was 'embarrassing and there is no other way to describe it'.

If there were any lessons for the Ashes series, Bailey said, "I am not sure. It will be a hell of an Ashes Test match if that is the sort of cricket that is played."

The in-form Bailey said he would love to be in the Test side but the spot would be up for grabs with many domestic players in contention.

"If Michael Clarke, Darren Lehmann or John Inverarity think I should be there then I would love to be there. There has been some great 100s scored back home in Shield cricket over the last few days. Those guys will be desperate to be there. I would imagine that spot is up for grabs," he said.

Comments
Topics mentioned in this article
Cricket India Cricket Team Australia Cricket Team George Bailey Sachin Ramesh Tendulkar RG Sharma India vs Australia 2013-14
Get the latest updates on India vs Australia and check out  Schedule, Results and Live Score. Like us on Facebook or follow us on Twitter for more sports updates. You can also download the NDTV Cricket app for Android or iOS.