India's scintillating 360-run chase against Australia on Wednesday was not the first time that the Men in Blue made the opposition see red while chasing. Here is a look at the other instances when Team India has stunned critics and left fans screaming loud with their heroic run chases. India's unbelievable chase against Australia on Wednesday night was a brilliant display of batting aggression - one unlikely to fade from memory for years. However, it was definitely not the first time that the Men in Blue made the opposition see red while chasing. Here are the other occasions when Team India has stunned critics and left fans screaming loud with their heroic run chases.

In February 2012, Tillakaratne Dilshan's unbeaten 160-run knock saw India face the mammoth task of chasing 321 to win the Hobart ODI in Australia. Chasing the target in 40 overs to move ahead made matters even worse. While Sachin Tendulkar and Virender Sehwag departed early, the script was in for a stunning change.

Virat Kohli came to the middle and threw caution to the wind with his 86-ball 133-run knock. India won the match against Sri Lanka and it became the team's quickest 300-plus successful run chase. Â

Centuries from Saeed Anwar and Ijaz Ahmed helped Pakistan set India a daunting 314 to chase in a 48-over match at Dhaka.

It came down to the last ball of the match and Hrishikesh Kanitkar became a household name by helping India win the Independence Cup by hitting a boundary off the penultimate ball of the match. 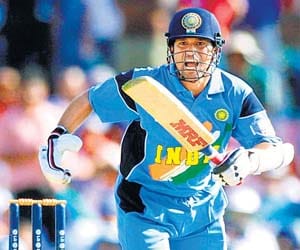 In the chase, it was Tendulkar who took the charge of mounting a fightback and Shoaib Akhtar, in particular, was made a special victim.

While Tendulkar missed his century by just two runs, he laid the foundation for Yuvraj Singh and Rahul Dravid to complete a memorable win in 46 overs.

The Indian team played well to ensure a berth in the final of Natwest Trophy, against England.

Marcus Trescothick and England captain Nasser Hussain though were intent on being uncharacteristic hosts. Both slammed tons to take England to 326.

In reply, the Indian team was left floundering despite Ganguly's quickfire half-century. At 146/5, hopes had almost faded away when youngsters Yuvraj and Mohammad Kaif combined to produce a sensational 121-run magical partnership. Kaif saw India through and Ganguly's bare-chested celebration became part of cricketing folklore.

Mahela Jayawardene of Sri Lanka was the man responsible for threatening to spoil India's party in Mumbai. In what was to be Sachin Tendulkar's last shot at winning a World Cup, his team didn't disappoint as the hosts managed to go past the finish line and claim their second title after 28 years.

Comments
Topics mentioned in this article
Cricket Australia Cricket Team India Cricket Team MS Dhoni Virat Kohli India vs Australia 2013-14
Get the latest updates on ICC T20 Worldcup 2022 and CWG 2022 check out the Schedule, Live Score and Medals Tally. Like us on Facebook or follow us on Twitter for more sports updates. You can also download the NDTV Cricket app for Android or iOS.