Rohit Sharma hit his first international hundred in three years in the swashbuckling 360-run chase against Australia in Jaipur on Wednesday. Having led Mumbai Indians this year seems to have gone a long way in the right-hander's coming of age. Rohit has reposed the faith in him as a ODI opener. 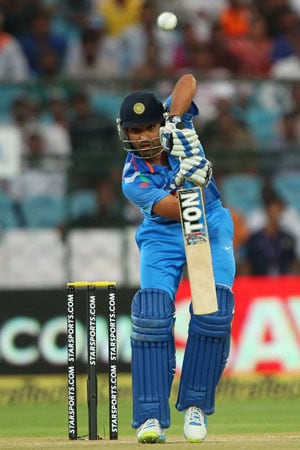 If opening the batting gave Rohit Sharma a fresh lease of life in international cricket, his match-winning 141 not out against Australia in Jaipur on Wednesday (October 16, 2013) may have well turned the course of his international career.

It was not surprising to see Rohit amongst the runs in India's marathon run chase at the Sawai Mansingh Stadium, but it was the way in which he got those runs that has impressed many. The Mumbai right-hander always had the lazy elegance, the poise, time to play the shots but what was heartening to see was his temperament to hang on till the end and take the team through to a memorable win.

Former India batting legend Sunil Gavaskar says Rohit's tremendous knock in Jaipur is a turning point in his career. "Rohit has promised so much, he has got lovely thirties, fifties and sixties in the past but to go on and stay right till the end, that is a huge plus. One, it will make him convinced that he can do it. I think it is a matter of believing in yourself... think this could well be the turning point of Rohit's career," Gavaskar told NDTV on Wednesday.

Rohit, who received his fourth man-of-the-match award, admitted in the post-match press conference he used to get out to stupid shots earlier. Gavaskar, along with many other pundits, is of the opinion that the responsibility of leading the Mumbai Indians in the successful IPL 6 campaign this year seems to have done wonders for the stroke-player.

"This realization in Rohit started to come during the IPL this year. When he got the responsibility of captaincy, he realized that there were some shots that he shouldn't be playing because if he gets out, it sends a wrong signal to the rest of the team. Since then he has tightened up his game considerably," said Gavaskar.

"When you curb your natural game to a certain extent without losing the basic contours of your game, than you go on to become a better player. For all you know, this knock could be a flash in the pan but I'm an optimist and this could well be the turning point in his career," said Gavaskar.

Based on numbers as well, Rohit has proved that the year 2013 has been a watershed period in his playing career. From years 2007-2012, the 26-year-old managed 1978 runs in 86 one-day internationals at well below-par average of 29.73, including two hundreds and 12 fifties. His last hundred came against Sri Lanka on May 30, 2010 when he scored a run-a-ball 101 not out at Bulawayo, after registering his maiden hundred (114) two days earlier against Zimbabwe on the same venue. Only thrice Rohit opened the batting prior to this year.

Turn the calendar to 2013 and Rohit is one of the factors behind India's successes in ODIs. With an average of 50.86 in 18 matches, scoring a whopping 763 runs with the help of one hundred and six fifties, Rohit has been impressive. He has been India's third-highest run- getter this year after Kohli (850 runs in 24 games) and Dhawan (809 runs in 16 games).

Numbers and consistency have shown that the stylish batsman, who has 104 ODIs to his name, is now more than ready for a Test cap, having found some form in whites, while scoring 119 for India A against South Africans in an unofficial Test at Rustenberg in August. With Sachin Tendulkar retiring from Tests shortly, Rohit, who has been named Mumbai Ranji captain, presents an exciting prospect for national selectors in the days to come.

Comments
Topics mentioned in this article
RG Sharma Cricket India Cricket Team Australia Cricket Team India vs Australia 2013-14
Get the latest updates on ICC T20 Worldcup 2022 and CWG 2022 check out the Schedule, Live Score and Medals Tally. Like us on Facebook or follow us on Twitter for more sports updates. You can also download the NDTV Cricket app for Android or iOS.