Ricky Ponting has written in a book that while Michael Clarke was an excellent thinker, he never appeared to be one cut out to handle the captain's workload. 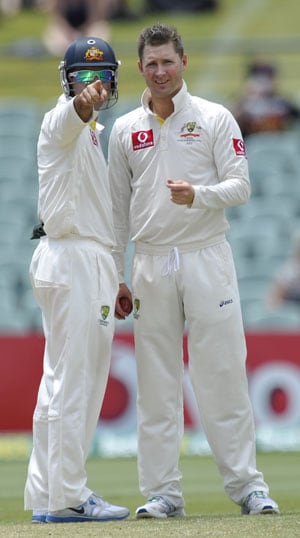 The details of the Australian cricket team's transitional turmoil continue to be laid bare by its retiring players with former captain Ricky Ponting becoming the latest to offer a peak into the dressing room and his doubts about his then deputy Michael Clarke's attitude.

After retired batsman Michael Hussey recalled his concerns about the Australian team culture in his autobiography 'Underneath the Southern Cross', it is Ponting's turn to revisit the turbulent times in his memoir 'The Close Of Play'.

In extracts from the book that were published by newspapers here, Ponting has spoken of his concerns about Clarke's attitude towards responsibility while he was vice-captain.

"I knew he was an excellent thinker on the game, but for a long time I was concerned that he wouldn't be able to handle the huge variety of 'little things' that go with being Australian captain.

"It wasn't that he was disruptive or treacherous, and publicly he said all the right things, but he had never been one to get too involved in planning sessions or debriefs at the end of a day's play, or to volunteer to take on any of the captain's workload," Ponting wrote.

"More than once, (then coach) Tim Nielsen and I had encouraged him to take on more of a leadership role within the group, but when Pup was down on form or if he had a problem away from cricket, he'd go into his shell," he recalled.

Ponting did not go into the details of it but said between 2008-10, Clarke seemed like moving "in a different world to the rest of us".

Comments
Topics mentioned in this article
Cricket Michael Hussey Michael Clarke Gregory Stephen Chappell Ricky Ponting Australia Cricket Team India Cricket Team India vs Australia 2013-14
Get the latest updates on ICC T20 Worldcup 2022 and CWG 2022 check out the Schedule, Live Score and Medals Tally. Like us on Facebook or follow us on Twitter for more sports updates. You can also download the NDTV Cricket app for Android or iOS.