Past ODI wins in India no advantage for us: George Bailey

Australia's stand-in captain for the ODI series in India says he will surprised if his side beat the hosts 6-1 to regain the No.1 ranking. 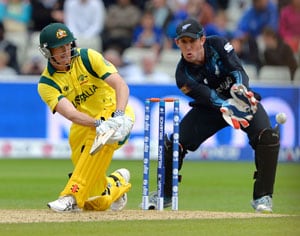 They are determined to recapture the number one spot in ICC rankings but Australia skipper George Bailey on Saturday said it would be "silly" to assume that the visitors would be able to thrash India by the requisite 6-1 margin in the seven-match series starting in Pune on Sunday.

"I think it will be silly to go hoping for a 6-1 result. It's a long way away and realistically I will be very surprised if that happens. It's one match at a time focus for us," Bailey told reporters at the pre-match press conference.

The Tasmanian, when reminded that Australia had never lost a best-of-seven bilateral ODI series in India winning 4-2 on the two previous occasions, said his team would not gain any extra plus from this fact.

"I don't think there's any advantage. It's a nice statistic though but there's no advantage to be gained from this. I don't worry about it too much, I am not really thinking about maintaining the (winning) streak," he said.

Bailey, who is leading the team in absence of injured regular captain Michael Clarke, was candid in his admission that India boast of a formidable batting outfit.

"India are very good. They deserve to be number one in the world. They were the best team in the Champions Trophy. They are a very well balanced side and we have to combat that. We are well placed to do that.

"I feel their batting is very strong. They bat right through to eight and nine. Their top seven are really strong. But if you focus on one batter then another one is going to jump up and hurt you," he said.

The Aussies started the tour on a losing note when they were beaten by four wickets in the one-off T20 game at Rajkot, but Bailey saw a few positives for his team from the match.

"(There were) plenty of positives. (It was a) good game of cricket. Aaron Finch's form at the top of the order was great and the way Xavier Doherty bowled was very pleasing. We fielded well, our attitude was good and there were a lot of things to like."

Bailey, however, demanded better show from his bowlers in the ODI series.

"I don't think there were any concerns with the conditions. It was a problem with execution (of plans). We have to play consistent cricket to win the series. The other night we batted really well but didn't bowl the same way. We need to perform in all three facets," he said.

According to Bailey, the team had rested Mitchell Johnson, their experienced left-arm pacer, from the T20 game more as a precautionary measure as there were seven ODIs to follow.

"(It was) more precautionary that Johnson sat out the T20. We have seven games in a short span of time. We have given him all the time to recover but I am certainly expecting him to be all right.

"I was really impressed with his bowling in England. His asset is his pace which is always very helpful here. He can swing the new ball which is very important here. Those two things we are hoping to see from him. He is really happy and that makes it easy for him to enjoy his cricket," he added.

Bailey expected a good batting track for the game and said, though it was the first-ever ODI at this venue, the Indian team players - having got used to these conditions when playing for IPL franchises over the last two seasons - did have some home advantage.

"I haven't had a look at the wicket. The ground always has a beautiful outfield. Expecting a good batting wicket and great weather. I have never played a ODI series here so I don't know what to expect. India has historically produced good ODI wickets and I am hopeful of them continuing with that.

He agreed with India skipper Mahendra Singh Dhoni that dew could be a factor.

"It will be a factor when there's dew on the ground," he said.

Comments
Topics mentioned in this article
Cricket George Bailey India Cricket Team Australia Cricket Team India vs Australia 2013-14
Get the latest updates on ICC T20 Worldcup 2022 and CWG 2022 check out the Schedule, Live Score and Medals Tally. Like us on Facebook or follow us on Twitter for more sports updates. You can also download the NDTV Cricket app for Android or iOS.