My best knock and best chase I have ever been part of, says Rohit Sharma

Having scored 141 off only 123 balls, Rohit said that the players never thought that the target was not gettable. 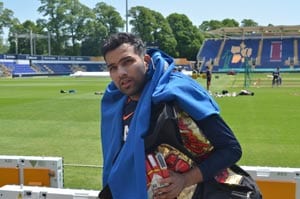 Rohit Sharma was on Wednesday a visibly happy man after a superlative unbeaten knock of 141 in a record chase by India in the second ODI against Australia which he termed as the "best that he has ever been part of" in his six year international career.

"Obviously this is my best innings in ODI cricket and probably the best chase that I have been part of in my six years with the Indian team. I am very happy that I have converted my start into a big score but more satisfied as the team won chasing a tough target," Rohit told reporters at the post-match press conference.

Asked if he was a relieved man after his knock, he gave a tongue-in-cheek reply, "I guess, you guys were more frustrated than me for not getting a hundred. I can see quite a few smiles there and that really feels heartening."

Having scored 141 off only 123 balls, Rohit said that the players never thought that the target was not gettable.

"With the new set of ODI rules, you have five fielders inside the circle which makes it very difficult for the bowlers to contain. We knew that the chase was tough but certainly not impossible. Myself and Shikhar got a good start and then Virat played some unbelievable shots to become the fastest Indian to score a century in ODIs."

Rohit did admit that dew played an important role in the context of the match.

"We knew that bowlers will have a difficulty due to the dew factor. We needed to hold our nerves and we did that. We had to capitalize on loose balls. We have now got the momentum and we can't be complacent. We have to carry from here on," he said.

On a personal note, Rohit said that this was an important knock simply because of the magnitude of runs he scored.

"It was satisfying that I stayed at the wicket and got a big score. But I don't want to stop here as I want to play many more knocks like this in the years to come," he said.

Rohit said that both him and Shikhar Dhawan decided to break the chase into small targets.

"We decided that we will take 40 runs at a time and Shikhar got us the momentum with his strokeplay. It's unfortunate that he got out but he was just trying to play his natural game."

The opener, however, defended the poor show from the Indian bowlers who have now given away 864 runs in 120 overs (in three matches) at an average of 7.20.

"I don't think that we need to worry too much about the bowling. This can happen sometimes and you must realize that with the new set of ODI rules, it is really against the bowlers. They have won us series previously," he said.

When a scribe asked whether he felt sad for the bowlers, Rohit replied, "They (bowlers) don't feel sad when they get us out. In professional sport, you have got to be ruthless."

Having been named the Mumbai captain with his predecessor Ajit Agarkar calling it quits day, Rohit did not forget to mention the contribution of former speedster.

"He has been a tremendous servant for Mumbai and Indian cricket. It was a real pleasure to share the dressing room with Ajit and play alongside him in a Ranji Trophy winning squad. Mumbai will surely miss him."

Comments
Topics mentioned in this article
Cricket RG Sharma Australia Cricket Team India Cricket Team India vs Australia 2013-14
Get the latest updates on ICC T20 Worldcup 2022 and CWG 2022 check out the Schedule, Live Score and Medals Tally. Like us on Facebook or follow us on Twitter for more sports updates. You can also download the NDTV Cricket app for Android or iOS.