Chasing Australia's 201 for 7 in the one-off T20 at Rajkot, India rode a swashbuckling 35-ball 77 not out by Yuvraj Singh to reach the target with two balls to spare. Catch all the highlights from the game, as they happened.

India beat Australia by 6 wickets in the lone T20I at the Saurashtra Cricket Association Stadium, Khandheri in Rajkot. Catch all the highlights, as they happened: (Match Scorecard | Text Commentary | Match pics) 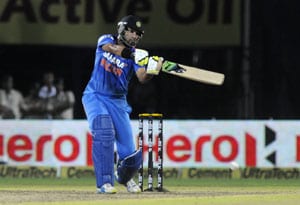 Quotes from the presentation:

MS Dhoni: "Yuvraj batted really well. We did not get off to a good start. We expected that by their bowlers to do well with the new ball. Yuvraj paced the innings well. We have not batted together off late and it was good to be batting with him again. When we bat together, we know what needs to be done. It was a stiff target. One or two good overs in the end is enough to restrict them and the batsmen did well by chasing it down."

Man-of-the-Match Yuvraj Singh: "I have lost a few kilos. Have worked really hard in the off season. Playing for India A helped me a lot. I am really confident and spoke to MS about how to go about in the end. There was no particular bowlers I targetted but I knew that Jadeja was still there so I took my chances. Good to start off with a win."

George Bailey:"You probably win when you score 200 on any other day in T20. We lost too many wickets at the end and there was no support for Finchy. We would have taken 200 at the start but Yuvraj batted brilliantly for India. Full credit to them, they played some good cricket. I did make some tactical errors on the field. It is the start off a good series, so looking forward to the ODIs."

(Read:India vs Australia T20I stats - Yuvraj first Indian to have career strike rate of 150 or more) 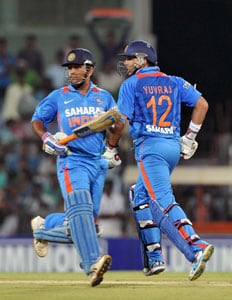 22:40 (IST) SIX! Yuvraj hits another one, this time off Nathan Coulter-Nile, over deep mid-wicket. Dhoni sensibly playing second fiddle to Yuvraj and letting him doing the big hitting. Indi a195.4 after 18.5, 7 needed from 7 balls.

22:36 (IST) As Yuvraj plans to announce his comeback to international in some style, here is iconic Sachin Tendulkar announcing his retirementfrom all cricket after his 200th Test.

22:25 (IST) Brilliant strokeplay by Yuvraj, who finds the gap between mid wicket and long on for a four off Doherty. India 153 after 16 overs, with 49 needed off 24 balls.

22:15 (IST) SIXs Yuvraj Singh shows his class, hammers Clint McKay for two consecutive sixes and follows them with a four past fine leg. First he pulls mckay for 6 over mid wickets, then he plays the pick up flick over deep square leg but Watson fails to keep the ball inside the ropes. India 133/4 after 14 overs, chasing 202.

21:51 (IST) WICKET!Shikhar Dhawan, well-set, is out stumped by Brad Haddin off Xavier Doherty in his first over. Dhawan came down the track a bit too early and Doherty bowled it short. India 80 for 3 after 8.3 overs. Yuvraj Singh the new man in.

21:35 (IST) WICKET! Suresh Raina is caught trying to pull Nathan Coulter-Nile in front of square. Raina gets a thickish edge on that and it lobs up to Watson at mid-on. India 50/2 after 5.3 overs. 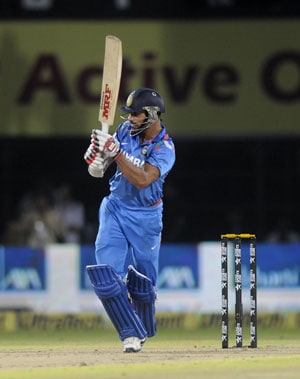 20:55 (IST) Australia end at 201 for 7 as James Faulkner hit a six on the final ball of the innings. Coulter-Nile 12*, Faulkner 10* unbeaten. Three wickets each for Rohit Sharma and R Vinay Kumar. Rest of the Indian bowlers were massively expensive.

R Ashwin's eco rate of 20.50 per over is the worst in all T20Is amongst bowlers bowling at least 2 overs #IndvsAus

20:48 (IST) WICKET! Bhuvneshwar Kumar gets rid of Moises Henriques for 12. Yuvraj Singh picks up the catch at backward point. Australia 181 for 7 after 17.5 overs. Nathan Coulter-Nile and James Faulkner at crease.

20:43 (IST) WICKET! R Vinay Kumar picks up the well-set Aaron Finch, who drills the ball straight back at him. Vinay sticks out his left hand and takes the catch. Australia 174 for 6 after 16.3 overs. 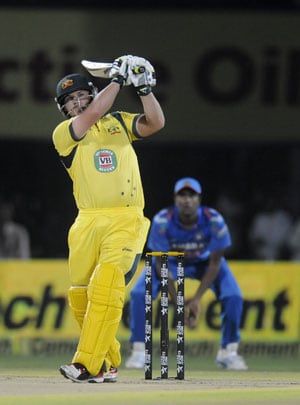 20:27 (IST) WICKET! Brad Haddin is out caught behind off Bhuvneshwar Kumar, tries to go for cut when the ball was close to the body. Haddin made 5. Australia 146 for 5 after 13.3 overs.

20:20 (IST) WICKET!Dangerous Glenn Maxwell falls to Ravindra Jadeja as Ishant Sharma takes a sharp catch at the long-on fence. Australia 125/4 after 11.4 overs. Brad Haddin is the next man in.

20:15 (IST) SIXs! Counter-attack by Glenn Maxwell, who hits R Ashwin for three sixes in the 10th over. Aaron Finch, on the other hand, has reached his second T20 fifty, in just 29 balls.

20:06 (IST) WICKETS! R Vinay Kumar brings India back with two wickets. First he gets Shane Watson out lbw for 6, two balls later Australia skipper George Bailey mistimes a pull and gets caught at deep square leg by Ravindra Jadeja. Australia 86 for 3 after 8 overs.

19:59 (IST) SIX! Finch drills Ravindra Jadeja over deep extra cover for the second six of the evening. Australia 82/1 after 7 overs.

19:52 (IST) WICKET! Nic Maddinson is out and Bhuvneshwar Kumar strikes. Bhuvi got this one to tail in from round the wicket and Maddinson missed a short-arm pull. Australia 60/1 after 5 overs. Shane Watson is the new man in.

19:43 (IST) FIRST SIX! Nic Maddinson pulls Ishant Sharma's first ball for a huge six over long leg, follows it up with another four, past fine-leg. Australia 46/0 after 3.2 overs.

19:35 (IST) First four for the debutant Nic Maddinson, drills Bhuvi for a four down towards long off. Australia 9/0 after 1 over.

18:55 (IST)Good news from Rajkot is that rain has stayed away, although it is a bit overcast. Toss in 5 minutes!

To read all the news and reactions regarding Sachin Tendulkar's Test retirement after his 200th game, visit our Sachin Zone As a young Australian team faces the full might of the Indians under MS Dhoni - further bolstered by Yuvraj Singh's return as well - the one-off T20 can be a sign of things to come in the ODIs to follow.

The match, which is expected to set the tone for a grueling season ahead, promises to be an exciting face-off at the SCA Stadium, with Australia keen to test their young players before the return Ashes showdown with England.

The elements, though, could play spoilsport. The state has been experiencing heavy downpour and the Met department has forecast more rains till Thursday.

The hosts, with most of their players having got into the groove for the long international season ahead by taking part in the Champions T20 League or by playing for India A, start as favourites against the visitors led by Tasmanian George Bailey. (Read full preview)

'Australia have not lost their fighting spirit'

Fully aware that the team from Down Under will have to bring out their best to cope with spin-friendly conditions on the tour, Bailey said they are always evolving to combat the subcontinental art.

The standard of the Australian cricket team has declined over the years but stand-in ODI skipper George Bailey is confident that his young brigade still has the firepower to overcome a formidable opposition like India.

"I am not sure if it has been missing for the entire two years. What we have lost is a lot of experience. We are trying to rebuild that. Guys are getting used to being in this side, being used to the scrutiny and pressure of international cricket. And to the different roles within the Australian side that they are playing," Bailey said on Thursday. (Read more) The Indian cricket team will kick off the new season in a brand new limited-overs kit, which was unveiled today by BCCI's official apparel partner Nike ahead of the series against Australia starting here on Thursday.

Indian captain Mahendra Singh Dhoni said the new kit has been developed with inputs from the cricketers.

"This particular jersey, a lot of feedback came from the players as to what they actually wanted in their jersey and I hope it has been incorporated," Dhoni said at the launch on the eve of the one off Twenty20 match against Australia. (Read more)

Comments
Topics mentioned in this article
Anil Kumble Yuvraj Singh MS Dhoni Gary Kirsten Cricket India Cricket Team Australia Cricket Team Saurashtra Cricket Association Stadium, Rajkot India vs Australia 2013-14
Get the latest updates on ICC T20 Worldcup 2022 and CWG 2022 check out the Schedule, Live Score and Medals Tally. Like us on Facebook or follow us on Twitter for more sports updates. You can also download the NDTV Cricket app for Android or iOS.